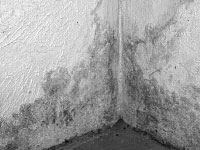 When Erin Krubeck moved into her off-campus house last year, she was surprised to find something already living there.
“We noticed some strange, damp smells so we went to the basement to see where the air was circulating from,” the senior marketing major said. “This is when we found that the entire basement was covered with mold, and it was circulating through the ducts.”
Facilities Management Director Ron Doerzaph said mold is common everywhere.
It’s most common in places with plants and furniture because of dirt and fabric, he said.
Mold likes warm temperatures and moist areas, so it is most likely to sprout up when it’s humid outside, Doerzaph said.
Krubeck said her landlord knew about the problem before she and her roommates moved in, because pieces of drywall with mold had been removed and set on the floor.
“Our landlord was pretty unaccommodating and just explained to us that the mold wasn’t in any living area, and it wasn’t a serious enough problem to fix,” she said. “We had to have an inspector out, and he deemed the house unfit to live in.”
Doerzaph said mold is most likely to grow in old buildings and in lower levels of buildings. He said he can’t speak for how mold is treated off-campus, but acknowledged that most off-campus houses students live in are relatively old.
Mold can cause many health problems including immune system suppression, sore throat, coughing, rashes, headaches, eye irritation and nasal problems, according to www.healthandenergy.com.
Mold also occurs in on-campus buildings, Doerzaph said.
“We’ve been very, very fortunate to not have much mold,” he said. “Westlake [Hall] periodically has problems because it’s an older building with a brick foundation, and a lot of rain soaks into the interior.”
He said campus investigates every possibility of mold reported.
“When we see a report from someone who sees or suspects mold, the Safety Supervisor, Rollin Arnett, will go to the location and visually inspect the area,” Doerzaph said. “If there’s suspected mold we’ll call in a firm to call a test.”
Mold may also be invisible, he said.
“There is a machine we can put into a room overnight [that] kills mold if you don’t know where it’s at,” Doerzaph said.
However, once mold grows in an area, it is never completely gone, it just becomes inactive. These areas must be kept especially dry, he said.
The price it costs to fix mold varies according to how large of an area the mold has infected, Doerzaph said.
“[About five or six years ago] water backed up into the library and caused $100,000 to $150,000 worth of damage, but a small room might only cost a few thousand,” he said.
Krubeck said she thinks many off-campus houses have mold problems.
“I have heard from multiple people that mold is an issue,” she said. “But because it’s so difficult to properly get rid of, [landlords] often paint over it. So then people get sick and don’t know what’s going on.”
Owner of Campus Club Rentals Merle Huff said there has never been mold in any of the houses he rents to students off-campus.
“You shouldn’t expect mold to start growing anywhere as long as it’s taken care of properly,” he said. “If you allow your house to get wet that would cause mold to grow.”
Huff said he thinks many students mistake mildew for mold, and said it can be wiped off with a towel.
To avoid mold, there needs to be good air circulation, and the air should be cool. Leaks should also be fixed immediately, Doerzaph said.
He also said Peoria has an “average” amount of mold, with northern parts of the country having less and southern parts having more.
More from NewsMore posts in News »