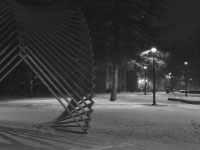 According to the National Weather Service, bitter winter weather is expected to continue through the remainder of February and into March.
National Weather Service meteorologist Ed Shimon said to expect a dry and colder than average March that will transition to a mild April.
“We’ve been colder than average,” Shimon said. “November and December were above average, and January and February have balanced that by being colder. We expect that March will be chillier than usual, but April should be right around average in temperature with slightly higher precipitation.”
Shimon said this winter has also seen a significant increase in snowfall.
“We are at around 17 inches above normal,” he said. “However, there will be a good ground water supply for the crops. We could probably handle a period of dry weather just fine.”
This winter harshly affected campus as well.
“The streets are really bad to drive on,” sophomore communications major Anthony Fongaro said. “I’ll lose traction sometimes. The snow removal quality here is not as good as it could be.”
Facility management administrative assistant Lois Parkhurst said she receives many calls complaining about the icy sidewalks.
“People call all the time,” Parkhurst said. “We hear a lot of complaints, but it’s good that people let us know so we can do something about it.”
Parkhurst said if the snow gets bad enough or a storm is expected, the supervisor determines if the grounds crew needs to come in early.
“We have a seasonal snow removal team that signs up, and we monitor the snow,” she said. “The crew had to come in at four in the morning on Monday to start clearing paths.”
Grounds Supervisor Stan Glazier said this winter was especially rough on funding.
“The snow started at the beginning of December and every four or five days we had some kind of snow event,” he said. “That depleted our ice melt supply. We had to order more, and the price goes up a lot mid-season. We’ve gone through 36 tons of ice melt, and I’ve already had to order more.”
Glazier said the weather has also taken a toll on his crew.
“The crew’s normal hours are 7 a.m. to 3:30 p.m., so when I have to have them come in at 4 a.m. and stay late, it really wears them down,” he said. “Getting out there and getting the sidewalks plowed is always a problem because the goal is to beat foot or vehicle traffic because when you mat it down it becomes icy and slick.”
Glazier said the chief nuisance to him and his crew is the city’s plowing system.
“We get more complaints of ice and snow build-up along Main Street to the rest of the academic buildings because we’ll get things plowed and then the city will plow stuff onto to our sidewalks and streets,” he said. “We aren’t allowed to plow onto city streets, but they plow their city streets onto us.”
More from NewsMore posts in News »