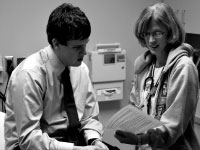 Only 415 students had opted to receive the H1N1 vaccination from Health Services as of Tuesday.
That number represents less than 9 percent of the undergraduate student body, of which a large majority has met the qualification to receive the vaccine. Before Thanksgiving Break, the vaccines became available to all students between the ages of 17 and 24.
Of the 700 doses Health Services has received, 285 remain.
Another vaccination clinic will take place from 8:30 a.m. to 12:30 p.m. today in Health Services. No appointment is necessary, and the shots are free.
Freshman AEP major Kennedy Scott said she received the vaccine before Thanksgiving Break and recommends it to other students.
“It was easy,” she said. “I just filled out the forms and waited maybe two minutes and a nurse came out and got me. It probably took two more minutes to get the shot and everything.”
Today’s clinic is also open to faculty and staff who are pregnant, the primary caregiver for a child less than 6 months old, have diabetes, asthma, a heart or lung condition or are immunocompromised.
In addition to H1N1 vaccines, the Health Center also received seasonal flu vaccines this week.
Because seasonal flu vaccines have seen a shortage this year, a number of the vaccines will go to students who are on a wait list. However, Medical Director for the Health Center Dr. Jessica Higgs said there will be about 100 for those not on the list. The shots are $25.
Health Services is still waiting to receive the majority of the 6,000 H1N1 vaccines it ordered.
Higgs said there is no way to tell when they will come and they will “simply show up one day.”
Health Services ordered the vaccines from the Illinois Department of Public Health, not from the county.
Although health experts say H1N1 has leveled off in the area, they also warn another stretch of it may come in the next few months.
Higgs said although students have not seemed eager to receive the vaccines, she plans on holding onto them once they come in.
Peoria County has seen one H1N1-related death, of which details were not released.
More from NewsMore posts in News »