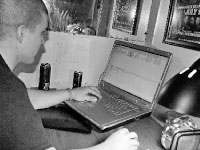 Cathy Goldufsky said she had been using Limewire for about three months before she received an e-mail that surprised her.
The sophomore family and consumer sciences major received the same e-mail as many other students, one that warned them they were infringing on copyright laws with their use of peer-to-peer file sharing applications.
Nial Johnson, the executive director of instructional technology and media services, said there are watchdog agencies associated with companies such as Lionsgate and Warner Bros. that alert him to students who illegally download and share music.
“In the past five years I’ve received five, 10,  maybe a few more on a semester basis, enough to realize that the activity was happening on campus,” Johnson said. “But this past semester, I received 75. I cannot tell you why … and my concern is that these type of activities are in violation of copyright laws.”
He said although using file-sharing applications such as Limewire and Kazaa are legal, it is illegal to share any copy-righted material.
“This is like digital shoplifiting,” Johnson said. “I wouldn’t expect you to walk into a store, put a CD in your purse and walk out without paying for it. But this type of activity is just that. You are taking something that you do not have legal rights to have on your computer and are resharing it back to the network. Quite often, people don’t even know it’s happening.”
Goldufsky said she wasn’t aware what she was doing was illegal.
“Watchdogs in the recording industry saw the Internet activity that was going on,” Goldufsky said. “I guess one of the songs that I had I didn’t have a copyright on it, and I accidentally was sharing it.”
She said she was told that if she didn’t get rid of her music, she would be unable to access the university network.
Also, students could receive settlement notices from the watchdog agencies, in which they could be fined, or they can be taken to court, Johnson said.
“Out of all the students I have talked to I have only had a couple repeat offenders,” he said. “My belief is that those students are working not to get caught again, and I am hoping they make the right choices.”
More from NewsMore posts in News »