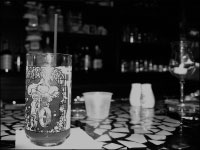 Jessica McGhee isn’t a wizard, but she says she can make a drink like one.
McGhee and her husband James recently opened Blue – a bar where you can sip cocktails out of a Disney-themed glass, play Jenga and borrow a Snuggie if you want to go outside for a smoke break.
Located at 619 W. Main St., between the Elbo Room and Mr. G’s, Blue is easy to miss if you don’t know it’s there. But that’s part of the plan.
“We say that it’s a hole in the wall, but it’s a nice hole in the wall,” Jessica said. “It’s just something different. We’re not going to have standard bar glasses, we’re not going to have fried food, we’re not going to have neon lights … because it’s everywhere. People that come here feel like they’re home.”
The McGhees worked from July to October to transform the space from a former “10 cent wing and 50 cent draught type place” to a quirky alternative to Downtown clubs, Jessica said.
Strands of blue beads weave through chandeliers, used men’s suit jackets reupholster the chairs and the countertop of the bar is made from smashed tile and mirror – all bought from secondhand stores.
“We just kind of had to think about what we could do to give it some personality,” Jessica said. “We didn’t have a lot of money to spend, but glitter’s really cheap and tile’s really cheap.”
In addition to drinks, such as the Blue Tide, which features vodka, amaretto, blue curacao and lemonade, Blue serves food.
Its most popular sandwiches are The Gatsby, which has deli turkey, swiss, fresh vegetables and pesto, and The Open Book which has avacado, mozzarella and olive oil seasoned with lemon pepper.
The sandwiches run around $8 and the drinks range from $3 to $9. Patrons need to be 21 or older after 9 p.m.
“We specifically aren’t trying to get people wasted,” Jessica said. “We’re just trying to feed people and get them drinks together and have a good time. We have the weakest Long Islands in town.”
Blue hasn’t advertised, and since its October opening, most of its customers have trickled in from word-of-mouth. One of the McGhees works from open to its 1 a.m. close every day, which Jessica said has helped create strong owner-customer relationships.
When asked if anyone has ever tried to steal a Snuggie, she was quick to decline.
“People have been so respectful, they’ve actually brought us stuff,” Jessica said. “Somebody brought us a box of glasses. One day we showed up and there were extra games.”
Although the second-hand decor and board games may appear to be what sets Blue apart from other bars during the day, things appear a little differently at night.
“It’s not weird to see someone in a Snuggie going up to someone they’ve never met and giving them a hug, because they drew it from the Jenga piece that people wrote dares all over,” Jessica said.
Providing an alternative to Peoria nightlife wasn’t the McGhees only goal in opening Blue, though.
They also hoped to spruce up Main Street. Their next plans are to paint a mural in the bar’s back alley to “smile it up,” James said.
More from NewsMore posts in News »