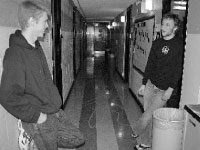 The Association of Residence Halls is teaming up with the Student Activities Office to form a committee of students to review the roommate survey.
Last year at Speak Up! a student voiced concern about the survey, which is used to pair roommates based on compatibility questions.
Executive Director of Residential Living and Leadership Nathan Thomas said he wants to address it.
“It’s something we want to be cognizant of, if there is perceived need to change, we’ll do it,” Thomas said. “If it’s important to the students then we will do it.”
Student Body President Jordan Ticaric said she feels similarly about updating the survey.
“I think it would be good because there isn’t a good way to pick a perfect roommate with the way the survey is now,” she said.
While the survey’s usage has changed, Thomas said the actual questions have stayed the same since he has been executive director.
“The role of the survey has changed over the years,” Thomas said. “It is now a part of the process for new students coming to campus.”
He also said there are some third-party systems that work like dating Web sites to match up roommates.
“There are programs similar to match.com that are out there,” Thomas said. “But those are expensive and I don’t think the demand would ever meet the cost since most new students already have a roommate.”
As of right now, the university utilizes a computer program to match up students who answer questions on the survey similarly. But, they are working on forming a committee to look into changes that need to be made, Thomas said.
The current survey is comprised of eight questions. It asks students to specify smoking preference, noise tolerance while studying, music preference, sleeping habits and willingness to share.
Some students feel the formation of a committee is necessary.
“I think the questions are good. I like that they ask to list what is most important,” senior chemistry major Kylee Korte said. “But, I think it’s hard to gauge with a survey how well students will match.”
Also, certain students said they think the survey is too vague.
“I think that the questions really don’t have anything to do with how people actually live together and how they interact on a daily basis,” freshman biology major Britten Wilson said. “I know quite a few people whose personalities simply do not fit based on the generalized questions in that survey.”
Other students said they agree.
“The questions are very subjective, and I think that’s a problem,” sophomore social work major Martha Podmanicki said. “They could define certain things like what exactly is a morning person or a night person and add more substance to the questions.”
The survey also leaves out some factors.
“You can lie on this so much or your standards of a neat person may be very different from someone else’s,” Podmanicki said.
Assistant Resident Adviser Cortney Dammeier said she feels the same.
“I think overall it needs to be more specific,” she said. “It should allow students to list what they are willing to share, and if they feel comfortable having guests stay the night during the day or the weekend.”
She also said most roommate problems stem from guests spending the night or disagreements over sharing things.
More from NewsMore posts in News »