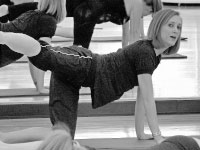 The Markin Family Student Recreation Center has experienced a huge boom in student participation with the newly added group fitness classes.
Since the start of the semester, students have been flocking to the new facility to take advantage of these workouts, which are offered many times a day throughout the week.
So far, 132 group fitness passes have been sold for this semester, compared to about 60 passes in any previous semester, Mike Keup, the director of the Markin Center said.
“Traditionally we have seen a huge increase in workout activity in the time between the start of the spring semester and Spring Break anyhow,” Keup said. “There has always been lots of demand for the cardio equipment, but by far, one of the areas that has just blown up is the participation in the group fitness classes.”
The reasons for this could vary, he said. It could be the time of year when everyone is following through on New Year’s resolutions, or that the new facility, with the natural lighting, mirrors and the new equipment, is a big draw. But he attributes the sharp increase in student workouts to the variety of group fitness classes being offered.
Pilates, PiYo, BU Spin and On the Ball are some of the classes available and focus on balance and strengthening of the body and core. Total Body Toning, Muscle Tone and Abs! are more traditional muscle-conditioning classes.
Zumba, a cardio class which combines Latin rhythms and dance moves, is a new class that Keup said has been hugely popular with students.
“That has been the class where the participating numbers have been just staggering,” he said. “Last week we had 68 people in this class. Anymore than that and it just gets too tight.”
Zumba is a new craze in cardio workouts and was created in Colombia.
The class has been so popular that Keup said he is looking for new ways to accommodate everyone who wants to join.
“We have looked to move it to another, bigger area,“ Keup said. “And this week we arranged for our instructor to be up on a podium so that the whole class can see her.”
Sue Neff, the instructor for the Zumba class mixes Cumbia, Salsa and Merengue dance styles with music created by Zumba.
“Even though it looks like a lot of fun, it definitely is a tough workout,” Neff said. “We start with two warm-up songs and then go right into working the whole body.”
But with 7,932 card swipes having been counted at the entrance desk within a five-day period, Zumba is not solely responsible for the sharp increase in students hitting the gym.
“All the other group fitness classes are also always very well-attended,” Keup said. “All together we have 32 of them throughout the week. The spin classes are very popular and I would consider hiring more instructors, because we could add more hours to the schedule.”
With 1,586 card swipes a day, the attendance is up from around 1,200 a day during the first week of the semester, Keup said.
“A lot of times we have more students working out than we have equipment,” he said. “We are really trying to keep up. The group fitness classes are just booming in front of our eyes.”
More from NewsMore posts in News »