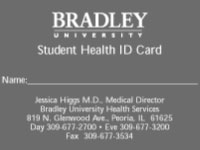 Health Center identification cards are now available to hold students’ personal health information.
Students can pick up the cards from their resident advisers, greek houses or from Health Services in the Markin Family Student Recreation Center.
The cards are designed to better communication between local hospitals and Health Services, Health Center Medical Director Jessica Higgs said.
“Often, we do not receive information about a student’s visit until a week afterward,” she said. “If we could receive that information sooner, it may help with professor notification, as well as a timely follow-up for the student.”
If a student takes a trip to an emergency room or urgent health center, they should show a receptionist their card and ask that a record of their visits be faxed or mailed to the address on the front of the card. If a doctor has a question, he or she will also be able to call the Health Center office or get in touch with Higgs.
Higgs said students’ main responsibility with the card is to keep it with them at all times.
However, some students said they don’t like the idea of having something additional to carry around.
“The concept behind the card is good, but carrying around another ID card just increases the chances that you’ll lose one or both,” freshman finance major Ben Sellnow said.
Since the cards are being handed out in bulk, they were laminated before distribution. Unfortunately, this makes it difficult for a student to write important health information on the card, Higgs said.
Because of this, the Health Center is supplying stickers to place on the cards where students can write any important medical information, such as existing chronic medical conditions or allergies.
This is especially useful because if a medical emergency were to happen in class and the student had his or her ID card the faculty and any responding medical professionals would be able to act quickly and correctly, Higgs said.
“In the future, we may try to have the cards laminated after they have the individual’s information on them,” she said.
Junior math secondary education major Nick Stocchero said he thinks the card could cause privacy issues.
“It’s a good idea in theory,” he said. “There could be some embarrassing information on that card that you don’t want everybody else to know.”
Freshman studio art major Damon Taylor said he agreed.
“To get around insecurities about having other people find out personal information like this, maybe the ID card should be more like a credit card, where a code is needed to find the information in the card,” he said.
More from NewsMore posts in News »