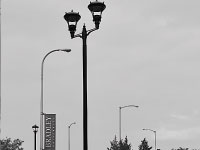 Students may notice their walks around campus are a little brighter this year.
Vice President for Business Affairs Gary Anna said the university will have spent almost $2.5 million on new light poles for campus, when construction is completed.
“Over 500 light poles ultimately will be installed,” he said. “That is actually a very large number for a campus this size.”
The lights have been installed on all parts of campus, from Elmwood Avenue in front of the Michel Student Center to the area in front of St. Mark’s church on Bradley Avenue.
“There were several parts along the walk from St. James to campus that were extremely dark,” Anna said. “St. Mark’s gave us permission to light those dark spots and make that walk safer for students.”
Although certain parts of campus have been given extra attention, junior theatre and photography major Katie Morgan said she still felt unsafe walking home.
“I noticed that when they were replacing the lights in front of Singles [Complex] they just took all of them out,” she said. “Then the entire street was dark. They really should have just taken out the ones they were replacing at the time. If I hadn’t been walking with someone, then it would have made me very nervous.”
The same thing is happening on Baker Quad, Anna said.
“We are currently taking out the existing lights so we can replace them with the updated ones,” he said. “That’s why we have all the extra construction going on over there.”
Anna said the plan did not need to be altered much during the construction phase, mostly because it was well planned from the beginning.
“Our original plan was quite specific,” he said. “Other than a few refinements along the way, we are pleased that we are doing better than our original estimates – both in time and in budget.”
The one addition that has been made to the original plan involves adding lights on the west side of campus where the new basketball facilities are being constructed, although those lights cannot be installed until those buildings have been completed, Anna said.
Despite the lights looking similar, Anna said two different kinds of lights are actually being installed.
“We have taller ones going in on the streets, and shorter ones actually inside campus,” he said.
The different kinds of light poles were chosen because of the different kinds of light they provide – all working toward making campus safer.
Morgan said she thinks the lights are a welcome addition to campus and should help keep people safe when they walk at night.
“It can be kind of creepy to walk around Peoria at night,” she said. “Students shouldn’t feel that way when they are walking on campus. The new lights should really help make it that much safer for students.”
More from NewsMore posts in News »