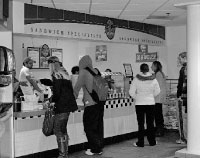 It was only 2000 when the ribbon was cut for the new Blimpie in the Michel Student Center.
Less than a decade later, a panini press has replaced the microwave, and Mill Street Sandwiches has replaced Blimpie.
Blimpie rated low in student satisfaction and a change was made based on requests from Student Senate and the Association of Residence Halls.
“It really dwindled down to the point where [Blimpie] was not well received at all,” Executive Chef Joe Morrissey said.
Mill Street Sandwiches is a freestanding operation where Bradley Food Service may purchase meats and breads from any vendors and not pay a franchise commission fee. Blimpie required a commission fee , and it also only used foods supplied by Blimpie-approved vendors.
Freshman business administration major Julian Simmons said she agreed.
“That stuff was terrible,” she said.
The soup and sandwich options at Mill Street Sandwiches are very similar to those available at the sandwich counter in Center Court. However, the new sandwich shop offers a wider variety of bread and meat as well as soups.
Students can either build their own sandwiches for $3.95 or choose specialty menu items such as the chicken teriyaki or Italian sub for $4.19.
“I really believe it’s a good concept to have here,” Morrissey said. “I think that [students] want something that’s fresh. They want variety and choices that are appealing.”
Sales have more than doubled compared to the original projections, Morrissey said. This may be because the sandwich shop is new and attracts student curiosity.
“It’s pretty good. It’s better than the last place,” Simmons said.
However, not all students have become fans of Mill Street Sandwiches.
“I feel like they changed the menu, but they haven’t changed the ingredients,” senior theatre major Forrest Sayrs said.
Mill Street Sandwiches will stay for now unless there is student interest in something else. It would be up to Senate and ARH to propose other franchise options, Morrissey said.
The space that was occupied by Blimpie is limited in its cooking options because of health and fire codes. This means that if a different franchise were to occupy the space, it could not operate with excess heat and smoke.
Some students have suggestions for what would please their pallets.
“Jimmy Johns is pretty popular,” junior electrical engineering major Erik Anderson said. “It satisfies all the food groups.”
Sayrs suggested Chipotle.
“Having a good Mexican place somewhere here other than La Bamba’s would definitely be awesome,” he said.
More from NewsMore posts in News »