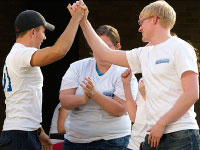 Student voting rate was high as were the spirits of Student Senate members and campaigning candidates when elections came to a close.
After weeks of campaigning and two days of open polls, Student Senate announced the Student Body Officers for the 2010-11 school year shortly after polls were closed at 5:30 p.m. on Tuesday in Olin quad.
Sophomore entrepreneurship major Nick Swiatkowski was elected student body president with 758 votes in his favor. Although he was the only presidential candidate on the ballot, write-in Kevin McClelland made a strong stand with 513 votes.
“It was good to have competition,” Swiatkowski said. “It motivated [our ticket] to push forward and work harder.”
Director of Student Activities Michelle Whited said according to election rules, write-in votes can only be tabulated if the candidate’s name is recognizable. Due to this rule, McClelland lost a total of 14 votes.
“For Kevin, there were a number of people who didn’t bother with his last name or didn’t come close to spelling McClelland anything like it even sounds,” she said. “So those votes fell into the ‘Other Write-in’ category of the final results.”
Sophomore AEP major Tricia Anklan was elected with 904 votes to continue her position as student body vice president for a second term.
“I’m really excited,” she said. “I am ready to continue to run with the steam that senate has created this past year.”
Anklan said the hardest part of the campaign was running on an individual ticket.
“It was very hard to run as an independent candidate,” she said. “I didn’t have other ticket members to campaign and work with, which made this election very stressful and hard to campaign for.”
Anklan said working with a student body president who has different campaign platforms than her will benefit the student body.
“I think it should be an easy transition between presidents,” she said. “It is just a matter of being on the same page. The fact that [Swiatkowski and I] have two different platforms will benefit the student body because there will be two different opinions.”
Taking the place of current Student Body Secretary Candace Esken will be junior accounting major Sarah Rayfield. Being the only candidate running for the secretary position, Rayfield won  with 1,086 votes.
“I was nervous,” she said. “I loved everyone I was running with [on the blue ticket] and we said that if one of us won it would be a victory for all of us.”
The fourth elected candidate is junior accounting major Andrew Kerr, who won with 707 votes over Jenny Nguyen.
“I was a little nervous,” he said. “Mid-race I was unsure of how many votes I was receiving. Now I’m very excited, I think next year we will have great ideas.”
Kerr ran alongside Rayfield and Swiatkowski on the blue ticket. They said they were disappointed that their fourth member on the blue ticket, Amanda Wenger, was not elected for vice president.
“I am very disappointed,” Rayfield said. “She was a big reason why I decided to run for a student body officer position and she encouraged me to become involved in senate in the first place. I hope that she comes back to senate. I think the organization would miss out if she didn’t.”
In total 1,625 students voted in this year’s elections. That is 171 more than last year’s number of 1,454 votes and almost 400 more votes than in 2008.
“I think elections were a great exercise of student democracy. I am proud of the student body for being engaged and involved in the election process.” said Student Body President Kyle Malinowski. “The senate has been active and very visible this year on campus, and it isn’t surprising to me to see more people wanting to have a say in who will be leading them next year.”
One of the last things Malinowski has pushed for while in office is encouraging the search for a new mascot. A referendum was added to this year’s ballot in response to University President Joanne Glasser and her cabinet’s decision not to address the issue of a mascot.
The results of the referendum were in favor of Malinowski’s hopes. Eight hundred seventy-eight students voted “Yes” while only 428 students voted “No.”
“I am hoping the administration will finally breath life into a comprehensive plan for when they are planning on tacking this issue, and in what capacity they are hoping the student body can participate,” Malinowski said.
Vice President of Student Affairs Alan Galsky said he will be presenting the results of the referendum to Glasser and her cabinet, and will relay the official response to the whole campus by the end of next week.
He said he is unsure how the administration will respond to the results but believes the reasons they decided to delay a decision in the first place still remain.
“The reasons that we initially delayed the response are still there,” Galsky said. “There are too many other things that need to be resolved before we address the issue of a mascot.”
More from NewsMore posts in News »