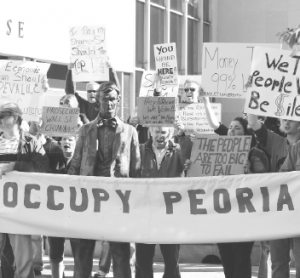 Students and Peoria residents alike gathered on the corner of University and Main Streets Saturday morning and held signs, chanted and asked for support from passing cars and pedestrians.The movement was for Occupy Peoria, an event where the community banded together to object to corruption.

“People need to wake up and stand up for justice economically and socially,” said junior social work major Andrew Englebrecht.

Senior religious studies and psychology major Ryan Pallante said protestors are out to voice their opinions.

“Nobody really gets to voice [their opinions] like a democracy anymore,” Pallante said. “We get to have a say in something, and that’s the very basic concept of what we’re doing.”

That was exactly what the Occupy Peoria participants did.

Protesters held signs reading: “America Must be Governed by the 99 percent, not the one percent”, “I Pledge Allegiance to the Underclass” and “It’s called the American Dream because you have to be asleep to believe. Wake up.”

“If you don’t know what’s being protested, look at the signs or ask,” Pallante said. “Everyone is protesting something, even if everyone isn’t protesting the exact same thing. You have to look at what people are saying to really see the message. The real problem is the social inequality in the country. Everyone should do an equal part. If you make more [money], you should do more [tax paying].”

Pallante said he doesn’t necessarily agree with everything being protested, but joined the protests to support the cause.

“I was there to support the whole movement, as well as the people who couldn’t be there,” he said. “I support everything they’re protesting, and there is a lot being protested. I don’t necessarily agree with everything though, like ending the [federal reserve]. I think we should do something with it, but not necessarily end it.”

According to the Occupy Peoria/ Bradley Action Committee Facebook page, the protesters wanted to “spread the Occupy Wall Street movement in a peaceful grassroots method,” and is based on the movement in New York City. The original protesters in New York are fighting against corporations in America, claiming they are running our government, using unmerited practices and placing money over individuals.  They called for students across the nation to come together, despite political standpoints, to demand change.

The Bradley students participating in Occupy Peoria focused on similar issues, as well as injustice at Bradley. The Facebook page argues, “Bradley students must overcome the stereotypical apathy that Bradley [University] is known for.”

While some Bradley students protesting at Occupy Peoria were focused on issues within the university, many students Peoria community members came out to protest corruption in America.

“I am protesting the way corporations and the rich are able to easily control our government,” Pallante said. “Our education is turning into a for-profit industry. We pay thousands of dollars a year and end up in tons of debt. We no longer have a say in our government. We vote, but really the people funding the politicians are the ones with the power.”

Students and Peoria residents of all ages, races and genders came together. The protesters moved from University and Main to downtown, stopping in front of the Chase Bank building.

Feedback on the wall of the Facebook page after the event revealed that many supporters would like to plan more “occupancies” in Peoria.

Pallante said he thinks the event was a success overall.

“It went pretty well, especially since it was Peoria,” he said. “You’d think less people would show up. There must have been somewhere between 400 and 800 people there at the beginning. I had been expecting more like 100 at most.”