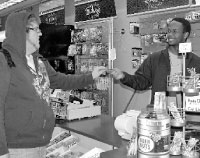 Although the recent economic downturn has caused many adults to lose their jobs and be unable to find new ones, students who work part-time on campus aren’t facing the same frenzy, Dawn Koeltzow said.
Few, if any, part-time on-campus jobs have been cut, because budgets are locked in, the Assistant Director of the Smith Career Center said.
“My sense is that nothing has changed,” Koeltzow said. “At this time we’re having the normal postings. Primarily all of the hiring is done at the part-time job expo in the fall before school starts.”
She said although the supply of jobs on campus has not gone down, demand may have gone up.
“We were seeing a slight slow-down in part-time off-campus postings, so we increased our marketing efforts and have seen a positive response,” Koeltzow said.
Some on-campus jobs require Federal Work-Study, which is a qualification students can find out if they meet by filling out the Free Application for Federal Student Aid.
Work-study is a form of financial aid in which students are paid part of the money they earn from their on-campus jobs by the government, with the thought that it helps them pay for their education, according to the U.S. Department of Education Web site. 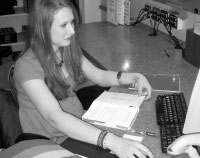 Although 14 on-campus departments require work-study and 10 do not, Koeltzow said those that require work-study offer fewer positions.
“Overall I think there are more available that do not require work- study,” she said.
Despite the economy, work-study programs aren’t set to increase, because departments are keeping their same budgets, she said.
Part-time Cullom-Davis Library worker Lindsay Wanner said the library has increased its amount of work available.
“This year there have been more jobs because the library has started staying open until 4 or 5 [a.m.] late in the semester,” the senior nursing major said. “We have a lot of people coming in to apply, and as far as this library goes there just aren’t that many open spots.”
Koeltzow said the Markin Family Student Recreation Center has also created new jobs for students.
She also said students can make a personal advising appointment with the Smith Career Center if they are looking to find a part-time job, and the center may be able to help them find career-related work experience.
The career center is also hosting events about how to find part-time jobs.
More from NewsMore posts in News »