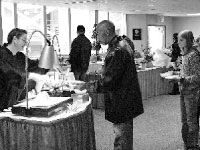 This past weekend students may have noticed campus was crawling with an abundance of adults and quite a few younger children.
Bradley’s annual Parents’ Weekend took place last weekend and had one of the highest attendances on record.
“We had 2,283 families register with a total of 4,676 family members included,” Executive Director for Student Involvement Greg Killoran said. “These numbers are somewhat higher than last year and last year was one of the highest we have ever recorded.”
There were more than 30 different activities on schedule for the weekend that began Friday morning and ran through Sunday afternoon.
Some of the events with the highest attendance included the President’s Welcome, which took place on Saturday morning, and had an audience comprised mostly of freshmen students and their parents. University President Joanne Glasser and Student Body President Jordan Ticaric gave  speeches to the parents.
Sophomore secondary education major Caitlyn Russo attended the event and said she learned a lot from the speech.
“[Glasser’s speech] was very informative and she spoke about what is taking place on the campus right now as well as in the future,” Russo said. “She seemed very genuine in her statement about loving the students and her job which probably impressed a lot of parents.”
President of the Parents’ Association Chris Corrie also spoke, and urged students to attend the free tutoring available in the Learning Assistance Center in the library.
Also, Jordan Ticaric read from the Parent Award Nomination which outlined a student whose parent had suffered through a car crash and brain tumor among other obstacles.
The student said her mother “has saved me in her endurance … and her example of how to bear struggles with grace.”
The Parent of the Year Award was then presented to Cheryl Brightenstein by Glasser while the audience gave her a standing ovation.
The Bradley Chamber Singers also performed for the crowd.
Afterward, Glasser said her favorite part of Parents ‘Weekend is “the parents getting to see their students at their home away from home.”
The Faux Designer Purse sale that takes place every year was very successful as well. The sale was hosted by the Dance Marathon.
The company, Whatever Plus Inc., which sold the purses, donated 15 percent of its profits to the marathon’s benefit for The Children’s Hospital of Illinois at OSF St. Francis Medical Center. Also, Arbonne skincare products had a table at the event and donated 35 percent of its proceeds to marathon’s efforts.
“Overall we made about $1,200 from the purse sale … that will go to our running total that will be announced at the end of the marathon,” Dance Marathon President Sara Bernardi said.
The Dance Marathon is still accepting contestants and the event takes place Nov. 7 to 8 in the Markin Family Student Recreational Center.
The Fashion Show put on by Bradley’s Fashion Merchandising Class was another popular event. Cindy Hudson, the mother of senior fashion consumer science education major Courtney Hudson, attended this year’s Parents’ Weekend for the first time.
“We have a farm in Indiana, so it’s a difficult time of year for [my husband and I] to get out here. But, I couldn’t miss it this year because my daughter helped design the set for [the Fashion Show],” Cindy Hudson said.
The show featured clothes from Macy’s and the outfits were modeled up and down the aisles while two announcers described the fashions for fall. The theme was B! Entertainment and purses from the sponsors as well as gift cards from Target and One World were raffled off.
More from NewsMore posts in News »