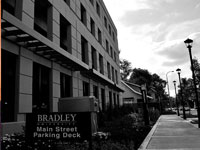 The Main West Parking Deck is a year old, but it isn’t being used to its full capacity.
The deck, located on the corners of Main Street and Maplewood Avenue, was built in August 2008 for commuter students, faculty and staff with a valid permit, said Charmin Hibberd, director of Conference Facilities and Parking.
But Hibberd added that the deck isn’t being fully used.
She said the current construction on the Athletic Performance Arena, occurring directly next to the parking deck, is likely deterring students, faculty and staff from the area.
“People are leery of walking through there, even though there is a sidewalk and it’s safe,” Hibberd said.
She also said some students and faculty have told her they think the deck is too far from the buildings they visit most often.
But Hibberd said she expects the deck’s usage to pick up when the new arena is complete.
Construction on other areas of campus may later contribute to a spike in the Main West deck’s usage, she said.
As expansion of Westlake Hall and construction on the Hayden-Clark Alumni Center begins, Hibberd said faculty parking on Glenwood Avenue will likely be reduced.
“They’ll have to park somewhere else when parking on [Glenwood] is eliminated,” she said.
The Main West deck will be available to handle that spillover.
Hibberd said the Glenwood faculty parking is the only issue she knows about currently, so students will likely not see an impact from construction on their parking spaces.
Senior English major Brittney Ferrero said she occasionally drives to campus and would consider using the Main West deck.
“It depends on what time of day you need to park on campus,” she said. “Other parking lots fill up quickly.”
Ferrero also said the construction on the arena near the deck wouldn’t prevent her from parking near it.
“I walk by it now with my dog,” she said. “It’s safe.”
More from NewsMore posts in News »