Parties come together for election party 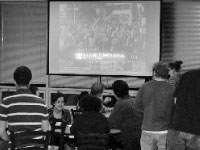 Students from three different political organizations  came together Tuesday night waiting anxiously for the election results to arrive at the first ever Election Night Extravaganza.
College Democrats initially organized the event because of the gravity of this election, and the event was attended by the College Democrats, the College Republicans and the Campus Greens.
The College Democrats  attempted to get all political organizations involved in the spirit of bipartisanship. Josh Cox, the president of College Democrats, said the main idea of the party was to take away the negative stigma that Bradley students don’t care about politics.
“We do have students here on campus who care,” he said.
Member of College Republicans Nick Kinzel said he agreed.
“A lot of people are passionate about politics, and we just wanted to give them an outlet,” he said.
Both Kinzel and Cox said they were surprised with the turnout, and all the students were watching the proceedings closely, either on one of the large TVs or on their laptops.  The two also agreed that the opportunity to joke around with each other was a welcomed “breather” from a long, hard political season.
Members of College Democrats Kyle McEvilly and Kamila Badat played a large part in making sure the event went off without a hitch.
The organizations transformed Lydia’s Lounge with streamers and American decorations, received food donations from  Bradley Food Services and designed templates so students could make their own buttons.
“Student participation is our main goal,” Badat said.
McEvilly said he agreed.
“We’re not about converting people, just getting the vote out,” he said.
Students filled the lounge and anticipations were high as the poll results came in.
Senior political science major Kathleen Groark said the reason she attended the event was to share the experience with other people, regardless of their affiliations.
She sat with senior elementary education major Sara Preis and sophomore political science major Candace Gruby and the group discussed their political views as they waited to see who the next president would be.
“I attended [the event] because this election is not only monumental but also, for our generation, the first time any of us can vote in the presidential race,” Preis said.
More from NewsMore posts in News »