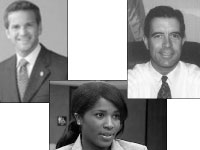 While the main focus of Tuesday night was the presidential election, there were also several important local elections that may have an affect on students.
Bradley alumnus, former Peoria School District 150 board president and 92nd district state Rep. Aaron Schock was elected to represent the 18th Congressional District.
Schock defeated Democrat Colleen Callahan and Green Candidate Sheldon Schafer for the seat, winning 59 percent of the vote, according to the Journal Star.
Schock spoke about the campaign from his election night party in the Civic Center Grand Ballroom.
“The campaign was about more than just being a Republican. I talked about issues that appealed to both Democrats and Republicans,” he said. “It’s flattering to have the outpouring of support here tonight. Now the real work starts.”
Schock will be sworn in on Jan. 6, 2009.
The race had been nationally recognized because many experts saw this as a once-in-a-century chance for Democrats to win the seat.
In another history-making election, Democrat Jehan Gordon was elected as the first black woman to represent the 92nd district.
Gordon’s victory places the seat back in the hands of Democrats after Republican Schock won the seat in an upset four years ago.
The 92nd district encompasses the southern two-thirds of Peoria, including downtown, West Peoria, Peoria Heights, Kickapoo and parts of Peoria County.
Peoria County State’s Attorney Kevin Lyons won his bid for re-election against Republican challenger Darin LaHood 54 percent to 46 percent, according to the Journal Star.
This win marked 20-year incumbent Lyons’ sixth term.
The race has been hotly contested since LaHood announced his candidacy more than a year ago.
In what many saw as the most controversial part of the campaign, LaHood went to the home of a juvenile sexual assault victim twice in August, something he still stands behind.
LaHood has also said throughout the campaign Peoria County had the worst crime rate in Illinois. Lyons argued those numbers were from 2005, and the crime rate has decreased every year since then.
Lyons also said his office has a 90 percent conviction rate for felonies and a 94 percent conviction rate for murders, so if numbers were important those are the ones voters should look at.
Voters across the state also shot down a referendum asking whether the state should host a constitutional convention. The constitution the state currently has calls for that question to be prepared to voters every 20 years.
While the voters didn’t pass the referendum, the question may live on in courts.
Proponents of the referendum may sue over the way the issue was worded on ballots.
Last month a Cook County Circuit Court judge ruled the language used on the ballot was unconstitutional and biased. The judge also ordered poll workers throughout the state to hand out fliers explaining the referendum, but Lt. Gov.. Pat Quinn’s office reported that many poll workers did not.
More from NewsMore posts in News »