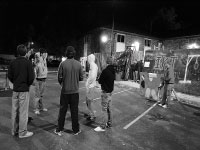 Members of Phi Kappa Tau helped raise money for terminally ill children in their own backyard last weekend.
They raised it through Carn-evil, their new event that benefits the Hole in the Wall Gang Camp, a summer camp for terminally ill children.
This is the first year Phi Tau hosted Carn-evil and Tyler Carnett, the fraternity’s philanthropy chair, said members brainstormed the theme for quite a while.
“We just wanted to stay with a Halloween theme so that stuck and the idea expanded from there,” he said.
Co-philanthropy chair Ryan Nitahara said there were many fun opportunities for students to partake in.
“We have over 15 different carnival games to participate in,” he said. “There is a ring toss, a football throw, hockey shoot out, karaoke and more.”
Junior biology major Liz Baney said she thought the carnival was a lot of fun.
“I went when the event started on the first night,” she said. “I played guess how many Reese’s Pieces are in the cookie jar and karaoke was fun.”
Nitahara said he thinks they had a good turnout because of Parents’ Weekend.
“Since it was Parents’ Week, there were mostly parents who showed up to the Carnival,” he said. “They enjoyed playing the games and had a great time. We are hoping that there will be a good showing of Bradley students this coming weekend.”
Baney said she arrived early in the first night and there were already 20 students in attendance.
“There were mostly students when I went, not really a lot of parents,” she said. “I don’t think the parents had gotten there yet.”
So far the event has raised more than $600 and Nitahara said he thinks the Carn-evil will be a success.
“We feel that there will be a good number of Bradley students as well as children in the surrounding community,” he said. “With more advertising of the carnival, we feel that there will be large turnout.”
Nitahara said he thinks the Carn-evil will become an annual event.
“I think the carnival has the potential to become a great and prosperous event,” he said. “This is our first year and we have been pretty successful. We can only go up from here.”
Baney said she would recommend the event to other people.
“I think it’s really good that [Phi Tau] is starting a philanthropy that we haven’t seen before,” she said.
Carn-evil replaces Phi Tau’s former philanthropy event, the Phi Tau Haunted House.
The Carn-evil will continue from 7 to 11 p.m. tonight and Saturday. Tickets will be sold for 50 cents apiece with games ranging from two to three tickets to play. Also popcorn is for sale for two tickets and a karaoke machine is available for free student use.
More from NewsMore posts in News »