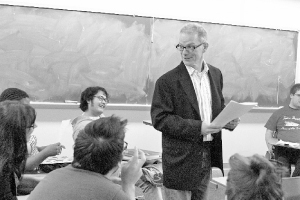 Kevin Stein, a professor, author and poet, has the task of increasing awareness and promotion of arts
Not every college campus can say it has the state Poet Laureate teaching English courses full-time.
Bradley, however, can proudly say that it does.
Professor of English Kevin Stein, who holds the title once held by literary greats Gwendolyn Brooks, Carl Sandburg and Howard Austin, said the position of Poet Laureate is one many people tend to be confused about.
“The Poet Laureate’s purpose is to be an ambassador for the art reform, promote arts to the public and to encourage the appreciation of the art,” he said. “It is up to a Poet Laureate to devise one’s own methods to make that awareness happen.
An activist laureate takes on a tremendous active preparatory role to promote the arts and is really vigorously promoting the art, like Gwendolyn Brooks before me. As far as what I have done, I tried to extend it into the 20th century.”
Graduating from Indiana University, Stein has been at Bradley since 1984, teaching in the English Department for almost 25 years.
During his time here, Stein has taught multiple graduate and undergraduate classes dealing with poetry and American literature.
Having his masters of arts degree in creative writing, Stein also serves as the director of Bradley’s Creative Writing program and heads up the Poetry Now! Campaign.
Born and raised in Anderson, Ind., Stein said his love for English and literature started in his garage through music.
“Creating lyrics for my garage band was my first touch with poetry,” Stein said. “Those lame lyrics were my first attempts at making something that was artistic. I found that I wrote better than I could sing or play guitar.”
In addition to being a full-time professor, Stein is also a published author and poet, literary critic and editor. Having published five poetry collections, two scholarly books, two poetry anthologies and many poems and essays in journals and anthologies. Stein’s work extends far beyond the classroom.
His first collection of poetry, “A Field of Wings,” published in 1986, was something Stein said is an almost indescribable feeling.
“It’s a heady feeling and there is the other side of that along the lines of frightening,” he said. “That’s because one realizes one’s work is exposed, not only to the public, but to your peers. There is a great mix of joy and dread because you have entered into realm from which there is no turning back.”
Along with being named the fourth Illinois Poet Laureate in 2003, Stein has received a plethora of other awards and prizes for his writing and dedication to teaching.
In 1989, Stein received the Bradley University Professor of the Year for excellence in teaching.
“Teaching is the most vivifying thing I do because here at Bradley, we have such great students,” Stein said. “My students challenge me and I learn as much from my students and their insights and difficulties as I do from any textbook. The best thing for me is seeing a student make a quantum leap forward in his or her understanding or ability. It is the most gratifying experience.”
While Stein admits there have been poets and authors along the way who have influenced his career, he said his favorites are always changing because he is always changing as an artist.
Also, Stein said he learns just as much from authors who don’t serve as inspiration because they teach him what he does not want to do in his writing.
Stein is working on publishing another book of essays, as well as constantly writing poems in hopes of having them one day grow into another poetry collection.
“A good writer is never not writing, which is to say you are always up to something,” he said. “I think that is what is sustaining about art – it is always there for you.”
Stein’s career as an educator and poet has taught him the importance of literature and English in the growth of the human experience.
Although biased towards the field, Stein said he feels literature and writing is something that helps readers understand our humanity.
“Understanding of literature and the arts helps us understand what it is to be human and it promises to deepen our understanding of the fix we as humans are in,” he said. “It helps to establish community across countries, cultures, races. We would have a lot fewer wars if we all took the time to read about each other’s views as to how we view ourselves as humans. We have a lot more in common with others than a war will show us.”
More from NewsMore posts in News »