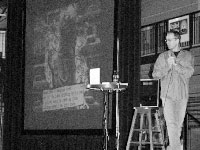 One had gay sex at church camp. One feels guilty about not fitting into a stereotype. One prayed for the first time.
These people have one thing in common – they mailed their secrets into Postsecret, an ongoing community art project where people anonymously mail their secrets on postcards, and the postcards are posted on a blog.
Nearly 200 million people have visited the blog since it was created four years ago. About 1,000 of these people were present to see Postsecret founder Frank Warren speak at Illinois Wesleyan University last Friday.
“Everyone has a secret that would just break your heart, if you only knew what it was. I think we all keep secrets, and I like to imagine each one of us putting our secrets in a box,” he said. “I think we make the decision to put them in a coffin each day or let them see the light.”
Warren’s lecture consisted of three parts – sharing how Postsecret was started, displaying secrets that have been banned from Postsecret books and allowing audience members to reveal their secrets in an “uncensored discussion.”
Warren said he thinks he started Postsecret because when he was in fourth grade, two of his classmates pinned him to the ground, held his eyes open and spit in them.
He said this event bothered him for 30 years, because he never told anyone about it.
“I feel as though I started this project as a way to reveal secrets I’d been hiding in my own life,” Warren said. “Secrets always involve tying our emotions in a knot, and sometimes they don’t make sense to us until we put them in words.”
He said he hopes everyone who shares a secret has the same therapeutic result he had from sharing how own.
“I hope it was a transition,” Warren said. “I hope it allowed them to become a different person, by sharing this secret. I think we all have the ability to change who we are.”
Postsecret began as a project for an art exhibit. Warren handed out 1,000 postcards to people in Washington D.C., and asked them to mail the postcards to his home address with a secret they’d never told anyone.
“I was surprised people mailed them back, but what was more surprising was that they didn’t stop coming,” Warren said. “I realized I’d tapped into something mystical. That’s when I stopped being the leader, and started being the follower of this expedition.”
He said his mom called the project “diabolical,” and his dad called the project “self-indulgent and narcissistic.”
Warren said his dad was able to realize how important the project was when he saw people’s reactions to the original art exhibit.
“It really gives you a chance to feel the full breathe of human emotion,” he said.
He said when reporters ask him questions about secrets, they always ask about crime.
“But the majority of these secrets are about eating disorders, self-harm and loneliness,” Warren said. “I don’t see these same concerns reflected in our culture.”
He said he works with 1-800-SUICIDE.
“In the short time I’ve been here tonight, there’s been two murders,” Warren said. “But four have taken their own lives. Sometimes I think of suicide as America’s secret.”
Warren said he receives more than 200 secrets a day, and choosing which ones to post on the blog each Sunday always takes several hours.
“I’m typically looking for postcards that have that ring of authenticity to them,” he said. “Every time I’m doing it I try to tell a different story.”
He said he thinks people also benefit from reading other people’s secrets.
“Eventually you come across a secret that resonates with your soul,” he said.
Warren said many have resonated with him, but the one that’s impacted him in the most surprising way was one that talked about imagining people in clip art pictures not wearing any underwear.
“I’ve changed a lot from this,” he said. “One way I know I’ve changed is when I see clip art, I can’t help but to imagine no one’s wearing any clip art underwear.”
More from NewsMore posts in News »