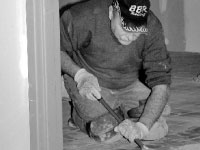 Heitz Hall will be the new home of the Pre-law Center, taking over the space previously occupied by the Health Center.
Last semester, the Health Center moved to the Markin Family Student Recreation Center.
Heitz is undergoing construction, and the Dean of the College of Liberal Arts and Sciences Claire Etaugh said a committee is in the final stages for choosing a director for the new center, who’s office will be in the space in Heitz.
The candidates have been interviewed, and she said she hopes a decision will be made by the end of this month.
If the construction in Heitz is not finished by the time a director is chosen, the director will have a temporary office in Bradley Hall, Etaugh said.
The Pre-Law Center will also have a conference room, Interim Provost and Vice President of Academic Affairs Robert Bolla said.
Etaugh said it was important to have a central location for all students who are going into law school to meet, whereas in the past, most of the focus may have been directed toward political science majors.
Senior journalism major Maureen Horcher said she is looking forward to entering law school after she graduates. She said she is glad to know the center will be there if she needs extra assistance in preparing for the LSATs, an exam students must take if they want to attend law school.
Senior political science and Spanish major Sarah Brooks said she agrees.
“I feel like I had to go through the whole process on my own,” she said. “I had to prep for the LSATs on my own and research law schools on my own.”
Brooks said she thinks the center will be helpful in informing students about the admissions process, because many steps are complicated, such as having to register with the law school admissions council.
Although the Pre-law Center will help students prepare for LSATS and apply to law schools, there are other goals that proponents of the center hope for it to achieve.
The past few years, Bradley has developed a mock trial program that assigns students different roles in the legal field and gives them practice in arguing cases, Etaugh said.
The Pre-law Center will give this program financial support in hopes to better the program. Additionally, the center will strengthen ties with the legal community as it networks with attorneys and provides students opportunities for internships in law offices and other areas of the legal field as well as the opportunity to shadow attorneys, Etaugh said.
Another possibility is for the Pre-law Center to host a Summer Enrichment Institute.
Just as there are summer camps geared toward educating high school students in careers such as nursing and engineering, the center will host a summer camp that will provide high school and college students with the opportunity to explore what a career in law is like.
“There are so many subfields in law that many students don’t even know about,” Etaugh said.
More from NewsMore posts in News »