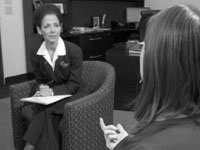 The President’s open-door policy is making a comeback.
University President Joanne Glasser will have open-door office hours to hear students’ opinions and concerns again this year, beginning Sept. 29 at 5 p.m.
Glasser began holding her office hours last February. Since opening her doors, she has had more than 100 students visit her.
“I hope it demystifies the president’s office,” she said. “I hope it gives them opportunity to know me on a personal level.”
Glasser said she doesn’t expect students to be the only ones who use the hours, but is most excited to hear about their university experiences.
“I love the direct contact with students,” Glasser said. “That’s my favorite part. I like to find out what’s on their minds.”
While many are excited,  some students also said they are skeptical.
“I think it is a good way for people to voice their opinions, except most of the time things are never resolved,” junior health science major Jessica Revord said. “I think that it might be too little of a time and not open for enough people to see her at those exact times.”
However, Glasser maintains her confidence.
“The anecdotes and feedback from students that come here are very positive,” Glasser said. “Before you draw a conclusion, come see me. If you don’t believe it is satisfactory, I am willing to reevaluate things.”
Glasser’s office is located on the second floor of Swords Hall. Students can walk in during open office hours and sign in to visit the president. Visits usually run five minutes and can be done individually or in groups.
More from NewsMore posts in News »