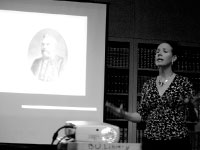 Bradley professor and historian Stacey Robertson spoke about women’s involvement in the Underground Railroad this week.
Her presentation, titled “Hearts Beating for Liberty: Women Abolitionists in the Old Northwest,” was hosted in the Wyckoff Room of the Cullom-Davis Library on Tuesday.
Throughout her presentation, about the role of women abolitionists in the early 1800s, Robertson discussed and explored with her audience the women abolitionist’s unique approach to fight and help the end of slavery.
“Women brilliantly negotiated a role for themselves in the movement,” Robertson said. “Women did what they needed to do, they did it quietly and got it done.”
She talked about western women and their distinct differences from those of the east. They developed strategic and fitting antislavery methods, which allowed them to discretely enter the male public. Working through antislavery societies, the women abolitionists sewed, sang, wrote and prayed, in hopes of putting an end to slavery.
The presentation emphasized the astonishing acts of women such as Laura Hayiland whose Underground Railroad activities caused the state of Kentucky to offer a $3,000 reward for her capture.
“Women by and large played a huge role in the Underground Railroad by taking care of and feeding the slaves on their way to freedom,” Robertson said.
She also spoke about a woman named Mary Brown Davis, who helped build the abolitionist Liberty Party across Illinois.
Davis was a Peoria woman who founded local and state female anti-slavery groups, while advocating not only against discriminatory black laws, but women’s rights.
“Women were successful during the movement, especially in the Midwest,” Robertson said. “Women of that time tweaked the image of womanhood.”
Robertson is the Oglesby Professor of American Heritage, Chair of the History Department and Director of the Women’s Studies Program. Throughout her career she has won many awards, including the Putnam Award and Professor of the Year, twice.
Robertson is the author of “Parker Pillsbury: Radical Abolitionist, Male Feminist,” published in 2000 by Cornell University Press. She also has two books coming out this year, “Hearts Beating for Liberty: Women Abolitionists in the Old Northwest,” and “Antebellum Women: Private, Public, Political,” co-authored with Carol Lasser.
More from NewsMore posts in News »