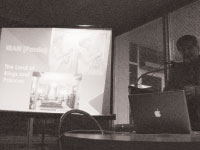 Thanks to the Diversity Affairs committee of Student Senate, each month a Bradley professor will give a speech about a culture different from our own.
Communications professor Ali Zohoori gave the first speech last Thursday, and he presented on a topic near to his heart – his native country Iran.
The presentation covered a wide variety of topics involving Iran, including the geography of the country, population, government and American misconceptions about Iran and its people.
Some of the myths mentioned included how Iranians hate Americans, Iran is a third-world country, women and religious minorities are oppressed by the government and Iranians are extremely religious to the point of being fanatical.
Zohoori said all these myths are false.
“Iranians are very spiritual, [but] not religious in the sense of being fanatical,” he said. “You can see their religion in their art and poetry, but most are definitely more spiritual than religious.”
A lot of Iranian spirituality and religion is represented in their architecture, Zohoori said, which is a unique blend of Western and Islamic cultures.
Some of the temples and palaces built in Iran are extremely old, constructed up to 600 years ago.
Because of the emphasis on architecture and art as a religious and spiritual outlet, Iranians are well known world wide for their art.
Zohoori also talked about how Iranian culture is characterized by friendship, charity, dignity, hospitality and delicious foods.
“If you go into an Iranian home and they offer you food, you have to be firm when you say no or they will continue to try and feed you,” he said. “They just really like to feed their guests. Continuously.”
Wassim Elhouar, chairman of Diversity Affairs for Student Senate, said, Senate is working to make students more aware of diversity on campus, and Zohoori’s speech was the first step.
“The goal of the committee is to show what diversity we have here at Bradley,” he said. “The stereotype here is that Bradley students are only rich, white kids from Chicago, but obviously that’s not true.”
Elhouar said the committee has had almost no presence on campus in the past, but he wants that to change.
“We’re going to be hosting a lot more events this year, including a multicultural Late Night BU in February, [Muslim Student Association] Hello Dinner and, notably, the Tunnel of Oppression, which will be in November,” he said.
So far, ideas for additional speeches include feminism, gay culture, Pakistani culture and a speech about Peru, Elhouar said.
More from NewsMore posts in News »