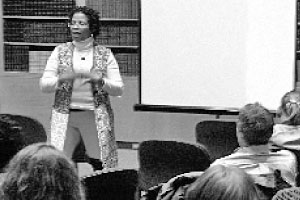 A mother waits for her daughter to come back from work at the factory. She doesn’t hear from her for several days. Finally, the police come with some bones, but they aren’t her daughter’s. There isn’t even a right leg. There are two left ones.
This is the terror that women have to face in the border town Juarez, Mexico.
“They are not missing,” English professor Demetrice Worley said. “These women have disappeared. Someone made them vanish.”
Worley wrote seven sonnets to give a voice to the women of Juarez, Mexico. Since 1993, 400 women have been murdered and 5,000 have disappeared.
“One poem was not going to hold this, Worley said. “There was too much pain.”
Worley said there are problems with the police department in Juarez. Bones don’t match. Clothes are put on the wrong bodies and the names of the victims don’t match the names on papers, she said.
Since NAFTA was signed in 1993, nearly all tariffs and trade restrictions between Canada, the United States and Mexico have been eliminated. Many United States factories have been exporting jobs to Mexico to cut labor costs. Though the products that Americans buy aren’t cheaper, company profits have increased.
“You are making $5 a day and milk is $2.75 a gallon,” Worley said. “When you have kids to feed, that’s a problem.”
Juarez has many maquiladoras, or factories that import materials on a tariff-free basis. The maquiladoras then export the assembled product back to the original country. Many of these companies are recognizable worldwide, such as Osram Sylviana and Electrolux Home Products.
Worley didn’t write her sonnets through the perspectives of the companies because she said those voices are heard all the time.
Maquiladoras favor employing women over men, because they are less likely to unionize and don’t demand higher wages. Men are being displaced and are not the primary providers, history professor Aurea Toxqui said.
Women workers are attacked if they complain about callous work conditions. They are forced to leave work in dark alleys because their factory bosses refuse to provide streetlights. If women are as little as three minutes late for work, the doors are locked and they are left outside alone, Worley said.
“The tricky part is that there’s no hard evidence,” she said. “What happens when a few people have power in a poor town? Crime.”
It isn’t known whether their factory bosses, the police or ordinary citizens, are killing these women. The police aren’t protecting the women, and factory bosses give their female workers self-defense advice rather than better street lights outside of the factories, Worley said.
Worley compares Juarez to Darfur, Rwanda and the Holocaust.
“These bodies are mutilated,” Worley said. “The breasts are cut off. There are knives stuck into their vaginas.”
Worley’s sonnets have nine to 13 syllables per line, a slight deviation from the traditional iambic pentameter.
Worley was triggered to write the sonnets after Peoria serial killer Larry Bright was charged with murdering eight black women in 2005.
“There’s something going on in your backyard,” Worley said.
A booklet of Worley’s sonnets can be purchased for $10. For every booklet, $2 goes toward a Juarez fund through Amnesty International. Her office is Bradley Hall 362, and her e-mail is daw@bradley.edu.
“As a poet I decided to be educated,” Worley said. “I decided to move people with voices they’ve never heard.”
More from NewsMore posts in News »