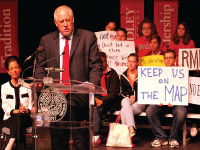 Gov. Pat Quinn spoke to a packed Hartmann Center Thursday morning to show his support for the reinstatement of funds for MAP grants.
“We’re going to get a solution,” he said. “We’re going to come together … to get $200 million to make sure it’s funded for second semester.”
Quinn stressed the need for legislators on both sides of the aisle to come together to find the money.
That money could from one of a few places, including a cigarette tax, which has passed the senate and needs to go through the house, or the tightening of tax loopholes, Quinn said.
“Democracy is not a spectator sport,” he said.
The center was crowded with not only Bradley students, but a number from Robert Morris University and Illinois Central College.
“This collaborative partnering … is truly unprecedented,” said University President Joanne Glasser about public and private schools working together on this issue. “Who will be given the opportunity to succeed is at stake. The landscape of higher education could be forever changed.”
Ryan Hall, a senior political science major from Illinois State University, also spoke about his personal situation and why MAP is important to him.
“I’m doing everything I can [to fund my education], but without [MAP], I can’t be sure that goal will come to fruition,” he said. “I know we’re rivals during basketball season, but [we’re united on this].”
Senior psychology major Jade Peters said as she approaches her final semester on the Hilltop, she’s not sure she’ll be able to make up the loss of her MAP grant should the funding not come through.
“It will be devastating if the state doesn’t fulfill its pledge,” she said to the audience. “There is no more assistance I can get.”
Glasser summed up the movement by saying this is an issue that can’t be divided by politics.
“This is not a Republican or Democratic issue, this is not an issue that divides Chicago from downstate,” she said. “This should not be a matter of politics.”
More from NewsMore posts in News »