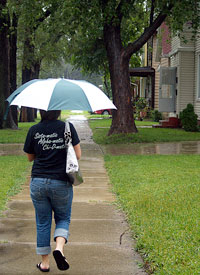 For some students, the puddles created by the large amounts of rain pelting Central Illinois last weekend are inconvenient, but there is no immediate solution to keeping the puddles at bay.
Sophomore psychology and administration of criminal justice major Becca Valladeres said she hates the feeling of having wet feet and jeans everyday.
“Since it’s still summer, no one really has the proper shoe attire,” she said. “Everyone wears warm clothes and sandals, but the puddles around campus leave our feet wet and the bottom of my jeans stay soaked all day.”
Sophomore nursing major Caitlin Smith said she agrees.
“After walking through puddles, my flip flops stay wet and when I walk into a building I keep slipping on the floors,” she said. “It’s very unsafe.”
Valladeres said she thinks it’s a problem that needs to be taken care of soon.
“The sidewalks are uneven and gather water at the shallow ends. The grass can’t hold much water either and everything overflows and gets muddy,” she said. “We pay enough tuition that they should be able to take care of it.”
Facilities Management Director Ron Doerzaph said Bradley is aware of the problem but said the university doesn’t have a solution right now.
Students have complained a lot about the puddles on Fredonia Avenue and around Heitz Hall, Doerzaph said.
“Heitz is what bothers me the most because of the ponding water,” he said. “But we aren’t sure how to get water away from the building because we don’t want it to back up.”
Smith said she lived in Heitz last year and can relate to the problem.
“After it would rain, the outside of Heitz was like a pool,” she said. “I would have to do leaps and jumps to get around it.”
Doerzaph said he hopes to redo the sidewalk by Heitz in about two year’s time. As for Fredonia, he said it is a city issue and currently they have limited funds.
Recently, the sidewalk near the corner of Jobst and Bradley Halls was replaced because it was too low, but Doerzaph said he doesn’t think it will always have a little water buildup.
“It can be hard to put in a level sidewalk,” he said. “Replacing sidewalks can be expensive. It costs about $6 per square foot. If it’s closer to the street it’s not so bad, but the closer it is to campus makes it cost more to load and remove the old sidewalk.”
While Smith thinks the puddles are a problem, she said it’s not something she feels very strongly about.
“Unless it’s some kind of hazard, I’d rather have my tuition go towards academics instead of fixing sidewalks,” she said.
Doerzaph said if students have any concerns, they can e-mail him.
“Students are the ones walking around campus not faculty members or me,” he said. “Sometimes there are issues that go unknown because by the time we get out there, the puddles have dried up and are gone.”
He said he wants students to understand while Bradley can’t get rid of every little puddle out there, feedback about large puddles and floods are welcome.
More from NewsMore posts in News »