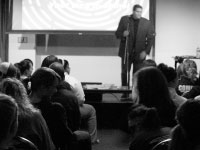 America’s real life Hitch visited Bradley Wednesday night.
David Coleman, the man who inspired the movie “Hitch,” came to speak to students about dating and relationships.
Some of his topics included the ways men and women show interest, long distance relationships, the friend zone, how to make men better lovers, what’s wrong with nice guys and how to make men and women happy.
A common theme throughout the night was the use of bad pick-up lines given by slideshows and audience members. Coleman said men use pick-up lines because it is harder for men to introduce themselves to women than it is for women to introduce themselves to men.
“Inherently women don’t trust men … they think they are only after one thing,” he said. “But the only pick up line a woman needs to use is to look into a man’s eyes and say hello.”
Coleman said his job was to prepare the audience to meet their hmm.
“Your hmm is someone who makes you stop in your tracks and makes you say hmm,” he said. “This can be someone you meet in class, someone who walks by, someone who you see while at the gym, anywhere.
“Be the fat penguin and break the ice,” Coleman said. “It’s not about appearance – it’s about your attitude.”
Although Coleman stressed a positive attitude, he reminded women of one thing.
“Men are visual,” he said. “You cannot dress like they do. You cannot be in sweats all the time. You’re a woman, not a Unabomber.”
He said one of the ways men show interest in women is by not being deterred by barriers.
“If he makes a solid effort to be around you a lot he’s either a stalker or interested,” Coleman said.
Other ways include “not being able to use player tactics, turning into mush brains and using the three eye contact.”
The three eye contact involves making eye contact with a woman then looking away abruptly, making eye contact again and holding the gaze for a second before looking away and then making eye contact a third time until she breaks the contact.
The final way a man shows interest is to work a line in order to find out if she’s in a relationship already.
“He might say something like ‘You’re boyfriend is so lucky’ in order to hear you say you don’t have one,” Coleman said.
He said some ways women express interest include maintaining eye contact, staying in a man’s presence, smiling, laughing and bantering with him, breaking the touch barrier, slyly giving contact information and testing the future.
Women can test the future by asking if a man is attending an event and making an affirmative comment such as “See you there?”
Coleman had the audience use what is called Jahari’s Window to look inside themselves. Students filled out a paper stating their favorite animal and three characteristics they liked about it, their favorite color and how it made them feel and their favorite body of water and how they felt around it.
One student said her favorite animal was a horse because it was powerful, smart and fun to ride.
Coleman said the meaning behind the animal was that it was how she felt other people viewed her.
“We buy our pets based on how we want other people to see us,” he said.
Most students described their colors as calm and peaceful.
Coleman said the colors were how students saw themselves and how they want to feel everyday.
The last category, the body of water, represented how students viewed sex for themselves.
“It’s the exchanging of bodily fluids,” Coleman said. “Bodies are made of primarily water and there is water in the womb.”
Senior advertising major Greg Shumaker said he thought Jahari’s Window was funny but not very accurate.
“For my body of water I put Lake Michigan and the words I put down were wet, drunk and friends,” he said.
Coleman said Jahari’s Window has a 90 percent accuracy rate.
Students asked many questions about why women weren’t attracted to nice guys.
“Nice guys rush to take care of women before women even know what they want,” Coleman said. “They are seen as needy, desperate and predictable and place women on a pedestal.”
He also said it’s hard to view nice guys outside of the friend zone.
“If nice guys treat everyone as nicely as they treat you then you’ll never feel special,” Coleman said.
Shumaker said he thought the presentation was great.
“I liked getting to know a woman’s side of relationships without having an awkward conversation with them,” he said. “I will most definitely use his tactics.”
More from NewsMore posts in News »