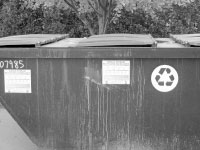 The effectiveness of St. James Apartment Complex’s new recycling program may lead to more recycling options being available on campus.
Last week a large recycling dumpster was placed in the north-east parking lot of St. James, and this week a letter was sent to residents telling them how they can obtain free personal recycling bins.
Recycling was taken away from St. James a few years ago when students weren’t doing it properly, Student Body President Jordan Ticaric said.
With the new effort, students collect recycling in their personal bins and then walk them to the dumpster. Ticaric said she thinks this will work, because the dumpster isn’t in the path of most students, and they’ll have to make an effort to use it.
“The dumpster is far enough away where they won’t walk by it and throw trash in it,” she said. “With this option, you’re not forced to recycle, but those who are serious about it will make smart choices.”
If the program is effective, it may also be enacted in other areas on campus, she said.
“I imagine we could have some type of answers by winter break,” Ticaric said. “If it’s really great, I don’t see why we couldn’t do it on campus second semester.”
Junior journalism major Julia Jensen said she thinks this type of recycling program would be good for the residence halls.
“This seems like the best way other than putting more public bins outside,” she said. “I’m an [assistant resident adviser], and we put a recycling bin in the bathroom, and two or three times a week it’s overflowing.”
After debating different recycling methods, the decision to use personal bins and a dumpster was made by the Student Advisory Committee and Cambridge Property Management, the company that manages St. James.
Students who want a recycling bin must go to Cambridge offices on Windom Avenue and request one.
The first set of bins will be ordered on Tuesday, but students can request them at any time.
Senior elementary education major Jaclyn Lewinsohn is a St. James resident, and said she thinks the bins and dumpster are a good idea, but the inconvenient location may stop some students from using it.
“I think at first people will use it and there’s going to be a lot of people making the effort,” she said. “But just like in the dorms, people would throw something in the recycling bin in their lobby, but then no one would ever actually take it to the recycling bin downstairs.
More from NewsMore posts in News »