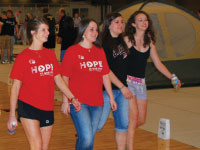 This past Friday night, students filled the Markin basketball courts for Relay for Life, an event raising money for cancer research.
The Relay for Life executive board planned the event for over a semester and was extremely pleased with the results of all of their hard work.
“The night of Relay was spectacular,” said Cara Burghardt, a member of the development committee. “Everything went smoothly and we had a great turn out.”
Co-chair Lauryn Landacre said they exceeded last year’s numbers.
“We saw … an increase in teams, participants, survivors and most important – donations,” she said.
Their numbers saw a significant increase due to some changes in fundraising and advertising.
The Relay executive board began fundraising last semester, and creatively advertised on the construction fences, along with making different banners and handmade posters.
In addition to these methods, they also made it a goal to have more greek support this year, compared to years previous.
One way this goal was accomplished was by having every sorority on campus registered to participate.
Publicity chair Melissa McGuire said this “showed a lot of support for the event.”
The support for Relay was evident to all who attended.
“The attendees were all enthused to be there and having a good time walking, talking and playing games,” sophomore civil engineering major Chris Sedlacko said.
Burghardt said she didn’t expect much because of Bradley’s size but was surprised.
“After seeing all the work and dedication that goes into the logistics of the event, I was very impressed,” Burghardt said. “Taking into account Bradley’s size, I didn’t expect much but was blown away by campus’ participation and enthusiasm.”
McGuire and Landacre said the participation in Relay totaled 46 teams, which is a growth from the 33 teams involved last year. This year’s number of registered participants equaled 327 and they also had 13 survivors attend.
Some of the survivors were able to share their stories throughout the course of the night.
“Hearing the survivors talk really put everything in perspective, and made me want to make a difference any way I can,” freshman nursing major Jordan West said.
A portion of the night also featured a Luminaria Ceremony.
“It was both very powerful and sorrowful to hear how many people lost their lives to cancer,” said sophomore civil engineering major Andrew Pollastrini.
So far the amount raised by this event equals $32,068. This total is around $10,000 more than last year’s grand total, and it is still climbing.
Co-chair Annie Azriel said they have more money coming in from different people, so the total could end up anywhere between $32,000  and $33,000.
“The most rewarding part of Relay though, is when everyone comes together – it’s a very celebratory event,” Burghardt said.
More from NewsMore posts in News »