Republican governor candidate to be determined 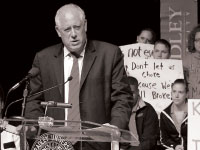 Three weeks after primary elections, voters still don’t have a verdict as to which republican will run for Illinois governor.
Republicans Bill Brady and Kirk Dillard and Democrat Governor Pat Quinn are running in the Illinois gubernatorial election in November 2010.
Senator Brady is a Bloomington native who owns a construction business, and Senator Dillard is former Chief of Staff for Governor Jim Edgar from Hinsdale.
Political science professor Craig Curtis said any of the candidates have the practice to do well as governor.
“Quinn’s the incumbent,” he said. “He knows who’s who and what’s what. But both the republicans have extensive legislative experience.”
Curtis said because Illinois is a blue state, he expects Quinn to get the vote.
“We know Cook County will be with Quinn,” he said. “Some of the collar counties might go for Brady. Some of his fellow republicans didn’t go for that, and he is trying to very hard to counter that. Dillard would also really need the collar counties to come out in a big way.”
In their campaigns, candidates focused most of their attention on Illinois’ debt.
“The state of Illinois owes billions of dollars,” Curtis said. “A lot of this money is owed to Medicaid providers. A big chunk of it is owed to the universities. Right now, [University of Illinois] has to borrow money just to make payroll. School districts are also supposed to be getting money.”
Curtis said when it came to the state’s debt, each of the candidates had varying strengths and weaknesses.
“I think a republican has a better chance of coming to grips with cutting spending, but I think a democrat would do a better job of finding more revenue,” he said. “They both have their strong points. I’m just hoping we can get the debt down from 13 billion to about three or four billion.”
Curtis said Illinois Speaker of the House of Representatives Michael Madigan would largely affect the election’s outcome.
“A big factor in this is the ‘I hate Madigan’ attitude,” he said. “If downstate and collar county independents believe that Madigan handpicked a candidate, they won’t vote for him.”
Curtis said while all the candidates were well-qualified, dealing with Madigan was another issue entirely.
“Quinn has a better chance of working with Madigan than a republican,” he said. “Dillard and Brady are both well-qualified. They know the ins and outs of state government. I can’t say whether they’ll be able to work with Madigan, but then again, I doubt anyone can.”
Freshman pre-business major Steve Cyrwus said he does not expect Quinn to continue as governor.
“I don’t think Quinn is suited for it,” he said. “He has always been the substitute governor, and he hasn’t done anything to step out of that shadow. He hasn’t proven that he can really take care of the office.”
Cyrwus said Dillard would make a good governor in any other situation, but due to the crisis Illinois is facing people would not understand the full effect of his efforts.
“He would still have a lot of learning to do,” Cyrwus said. “And we have to have someone who is going to do something.”
More from NewsMore posts in News »