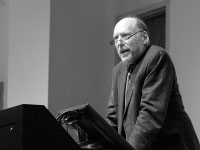 Todd Gitlin informed a full audience of the alarming dangers altering journalism on campus this week.
The chair of the Ph. D. program in communications at Columbia University’s lecture was called “A Glut of Crisis: Journalism and the Prospects for Democracy” discussed what Gitlin said he believed to be five major crises and a condition.
Those crises include deterioration in circulation of newspapers, the decline in advertisement revenue, a shrinkage in news reporting, the scattering of attention, the debacle of authority and journalism’s inability to receive the public’s trust.
“Despite the overuse of the word, there are crises,” he said. “And in the case of future journalism I think it’s the only word that makes sense.”
He warned that the settings and environment journalists operate in are changing and will continue to drastically change.
“The journalistic world [we] know is vanishing – it is melting away not just within their lifetimes, but before their eyes,” Gitlin said.
With statistics such as nearly every one in five newspaper journalists’ having lost their jobs since 2001, he made it clear print is an inevitable dying field.
“The newspaper exited 2008 harrowingly and entered 2009 in something perilously close to freefall,” Gitlin said. “Perhaps some parachutes will deploy and maybe some tree limbs will cushion the descent, but the bottom is not in sight.”
A contributing factor behind the failure of the newspaper industry is the Internet, he said.
Gitlan said consumers can find access to almost any newspaper online free of charge. This decreases the amount of individuals readings newspapers, which decreases the papers’ advertisement revenue.
A significant decline in advertisement revenue caused an adverse affect during the recession, rendering newspapers to lose 83 percent of their stock value in 2008 alone, Gitlin said.
“By the end of last year, you could by a share of stock in the McClatchy papers, which used to be one the highest quality chains for less than the cost of the paper – less than a dollar,” he said.
Due to this major loss, many news organizations, including the Tribune Company and the Sun Times Media Group, are going bankrupt.
Suggestions on several ideas on how to try to keep newspapers alive were given, from Gitlin and other writers.
“[Former managing editor of the Washington Post, Steve Coll] proposed that Congress make it easier for news organizations rebound themselves as nonprofit entities and to subsidize reporting institutions like bureaus.” Gitlin said.
Stemming from that idea, Gitlin said another idea would be to create a national endowment to protect all types of reporting.
“Even in the United States, we are rapidly running out of alternatives … I think we need a grown-up, concrete debate on how to do this [to ensure the survival of journalism],” he said.
Gitlin said journalism needs help soon “and not only is it too important to leave to business interests, [but] leaving it to the inept, greedy and wealthy of the nation’s newspapers to rescue journalism on their own would be like leaving it to institutional wizards of the American international group, Citi Bank, to create a workable just credit system – a crisis is a terrible thing to waste.”
More from NewsMore posts in News »