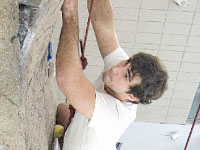 Anna Weiss’ idea of creating a rock climbing club on campus became a reality last semester when she found out the Markin Family Student Recreation Center would house a climbing wall.
“[The club] is a good way to find a climbing partner,” the junior art history major said. “I knew a few people who could rock climb and I knew it would be good idea to find out more people who wanted to do it.”
The club uses the wall on Thursday nights, but all students are welcome to climb from 4 to 10 p.m. Monday through Friday and from noon to 5 p.m. on Sunday.
Weiss is a wall manager and a co-president of the climbing club along with junior entrepreneurship major Joe Ballent.
She said she has been climbing for three or four years, but the wall can be used by beginning or advanced climbers.
“It’s a definite challenge,” she said. “As you get better and better, there’s always a harder route that you can try to tackle.”
Director of Campus Recreation Mike Keup said the climbing wall staff can create different routes students can follow up the wall. To vary the routes,  the staff moves around the hand holds on the wall. He said the staff will change the routes often to keep it interesting for students.
Keup said four people can climb the wall at once.
He said before students climb the wall, they must sign waivers and go through orientations.
“We’re prepared to check out all necessary equipment, we’ve got harnesses we’ve got shoes, we’ve got helmets, we’ve got the appropriate ropes,” he said. “We’re definitely prepared for if a beginner wanted to come and try it out.”
Weiss said she has seen about 70 students each weeknight use the wall and 40 or 50 students use the wall during the weekend.
“Towards the end of this year, it may taper off a little bit, but I think there are going to be people who will keep with it,” Weiss said.
She said there are two types of climbing taking place at the wall.
Top rope climbing is when there is a rope attached to the climber that is anchored to the top of the wall. The climber is also anchored to a person standing on the floor called a belayer.
With lead climbing, the climber is still attached to the rope but the rope isn’t anchored to the top of the wall. Instead, climbers bring the rope with them when they climb and clip the rope into the wall as they go.
“It’s a little bit different and it’s a little bit harder and when you fall, you fall a lot harder,” Weiss said. “But I think it’s fun.”
She said students can take classes in lead climbing at 9:30 a.m. Saturdays, and belaying classes will be offered 11 a.m. Saturdays.
Students must take the class and pass a test before becoming certified.
The bouldering wall, which is a horizontal climbing wall, is also available for students to use.
Weiss said the bouldering wall is not a practice wall but it offers students a different type of climbing.
She said it’s more strength- and power-oriented than the vertical wall.
Junior nursing major Meg Joshi said climbing the wall is a good addition to her workout.
“I felt it was a lot of work going up the wall because I had to repel with my legs and climb with my arms,” she said.
More from NewsMore posts in News »