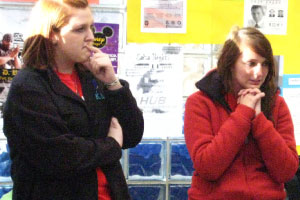 Runoffs will take place next week for president and VP
Two of the four positions in the Student Body Officer elections have yet to be decided.
When the results were announced Tuesday, no candidate for president or vice president received a majority of the votes.
The number of votes required to win the presidency is 699. Candidate Kyle Malinowski was just short of that number with 677 votes.
“I was happily surprised by the results and to see that I have a lot of support on campus,” Malinowski said. “Our ideas may be lofty and our goals high, but we have a plan and a concrete way to get there.”
Incumbent Student Body President Jordan Ticaric received 416 votes.
Malinowski and Ticaric will participate in a runoff election next Monday and Tuesday.
“The campaigning is exhausting but it is all part of the process,” Ticaric said. “We are glad that a lot of people came out to vote.”
The total number of votes cast was 1,454, just short of the stated goal of 1,500.
“We did not quite get to the 1,500 we wanted so we did not stop the bop,” Election Committee Chair David Mullner said. “We are not currently planning to do Stop the Bop for next week’s run-off elections.”
Candidates Nicholas Swiatkowski and Tee Johnson received 164 and 122 votes, respectively.
The other position yet to be decided is the vice presidency. Candidate Tricia Anklan fell six votes short of the required majority with 566 votes.
“I was really thrilled at the results,” Anklan said. “I think it is important that a lot of our support came from underclassmen and people in dorm life.”
Candidate Jade Peters was close behind Anklan with 561 votes.
“It was nerve wracking before the results were announced, I was really nervous,” Peters said. “That was crazy. I am still really shocked about the results, but I am glad so many people came out to vote, and I am looking forward to campaigning this week.”
One position decided in this week’s election was secretary. Candidate Candace Esken received 792 votes which was more than the 728 required to win.
“I am beyond excited. I am really happy for everything to be done with,” Esken said. “I am so happy to be getting secretary and am looking forward to getting started.”
Candidate Trisha Koors came in second in the bid for secretary with 452 votes.
Patrick Campbell won the position of treasurer Tuesday. Campbell received 614 votes out of 1,168 votes cast for treasurer.
James Lombard came in second with 513 votes.
With the results of this week’s election inconclusive for two of the four positions, Malinowski, Ticaric, Anklan and Peters now turn their attention to the run-off next week.
“It’s going to be the same kind of battle we had this week,” Malinowski said. “People know my message now, and we just need to focus on getting them out to vote.”
Esken and Campbell will be installed to their positions at 3:30 p.m. Monday in the Garrett Center while the run-off elections will be held on Monday and Tuesday.
More from NewsMore posts in News »