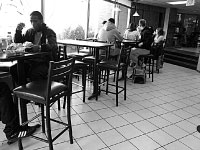 Night owls with growling stomachs could have another late-night food option next semester.

Student Senate and Dining Services are in the preliminary stages of examining a 24-hour food service option for students.

Center Court already has an exterior door, so security for the Williams Hall lobby wouldn’t be an issue, unlike Lydia’s Lounge. But Director of Dining Services Ron Gibson said he would be speaking with Facilities Management about possibly installing an exterior door in the lounge.

“We’re in the starting of the project,” Gibson said. “From here, we’re not too sure.”

Another challenge is finding workers for the late-night shifts. Anklan and Gibson both said Center Court would need to be manned by Dining Services workers, who are union employees and constricted by some union rules, such as limited hours per week.

But students in the department of Family and Consumer Sciences staff the lounge, removing the union issue.

Jimmy Lombard, campus affairs chairman for senate, said though the lounge employs FCS students now, keeping it open through the night could create jobs for other students too. However, senate and Food Services would need to coordinate with the FCS department about allowing non-FCS majors to work.

“If it will create more jobs and hire more people, we’d like to keep those jobs available for students,” Gibson said. “Center Court would need outside, union workers.”

The only late-night food options now are Bacci’s Pizza Express at Duryea Place and Bradley Avenue and La Bamba’s in CampusTown and Jimmy John’s on Main Street, but delivery is available.

Other students said a 24-hour food service option may not be necessary.

“In these economic times, maybe not 24 hours,” said Anthony Isherwood, a freshman accounting and finance major. “Maybe if it was just used during certain hours, reasonable hours, like until 1 a.m.”

Whatever the outcome, the possibility of a late-night or 24-hour food option on campus is still a ways off.

“It’s going to take time to get through all the people we need to speak to,” Lombard said.

But senate is holding to its goal of next semester. Anklan said the project could even be in place by the end of this year.

“We’ve already got it out that Lydia’s Lounge is a late-night option,” Gibson said. “I think in order to benefit students, it would need to stay that way.”