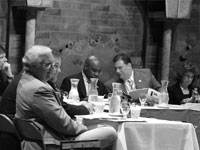 Despite a few theatrical one-liners, the group of people who filled the Hartmann Center on Tuesday weren’t there to see a show.
They were there for democracy in action.
Thirteen state senators converged on campus for a hearing about the way Illinois draws legislative districts.
Brad McMillan, the executive director for the Institute for Principled Leadership in Public Service, testified about the Illinois Reform Commission’s proposal to solve what he called a flawed process at the hearing.
“We really have one of the worst systems of drawing federal and state legislative maps in the country,” he said. “We have some of the most gerrymandered districts in the country.”
In Illinois, when the legislature cannot agree on a new district map, two names are put into a hat. The secretary of state then pulls a name from the hat. The political party that individual belongs to then controls the redistricting process.
The reform commission, which was created by Gov. Pat Quinn last winter, had 100 days to put together a plan of action to attempt to remedy that, which included the plan for overhauling Illinois’ process of drawing legislative districts.
The reform commission’s suggestion is that an independent redistricting consultant firm do redistricting. The goal would be to not include the address of the incumbent or political affiliations of voters in previous elections. The firm would also need to ensure the plan followed federal minority voting rights laws.
A committee appointed by members of the General Assembly’s leadership would also host public hearings and any plan created would have to be approved by a two-thirds majority vote in each house.
Should they be unable to agree, two-thirds of the Illinois Supreme Court would ensure the plan didn’t violate any law. Should the court be unable to reach a decision, a special master would decide.
“We do not in any way claim to have a lock on wisdom when it comes to this subject,” McMillan said. “It’s quite historic that we’re even having this hearing today because this has not occurred in Illinois, where there’s been a really thoughtful debate and discussion on the redistricting process.”
The senate’s redistricting committee was mixed on the proposal.
“I clearly believe the redistricting process is the root of all evil,” said Sen. Kirk Dillard, R-Hinsdale gubernatorial candidate who also is a member of the Senate’s Redistricting Committee. “The politicians should not be picking the people we represent. The people ought to pick us.”
Sen. Don Harmon, D-Oak Park, posed a variety of questions after McMillan’s testimony.
“Better is better,” he said. “Different is not necessarily better. The notion that we have to change something just to change it really undermines the intellectual honesty of this effort.”
Two experts testified in front of the committee as well.
Michael McDonald, an associate professor at George Mason University, said the proposal doesn’t have political neutrality and that removing the political affiliations of voters isn’t the answer.
And Bruce Cain, a professor at the University of California-Berkeley, said the proposal lacks in transparency and should have greater public involvement.
More from NewsMore posts in News »