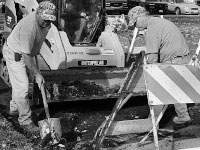 Bradley Grounds Crew is paving the way for a safer sidewalk system on campus.
Sidewalk renovations have begun on problem spots in front of Westlake Hall and near Bradley Hall in response to damage caused during the recent clock tower renovation.
“In order to reach the one face of the clock tower, a large piece of equipment was needed and the sidewalks cracked during the repair,” Director of Facilities Management Ron Doerzaph said.
The clock tower, which was renovated in the first week of October, was a necessary fix due to the future Westlake improvements. Also, to build the new alumni center, equipment routes and placement needed to be tested and this was a very opportune time.
“In preparation for the future Westlake and alumni expansions, we needed to investigate existing site utility locations,” Doerzaph said. “In doing so, a piece of that equipment used for this also damaged some other sidewalks.”
However, the sidewalk repairs are not just because of damage from building renovations. Doerzaph said renovations are done on an as needed basis. Environmental changes and safety concerns pose the biggest problems for the grounds crew.
One of the biggest complaints from the Bradley population is the way water gathers in certain points on campus after heavy rain or snow.
“Winter is the major cause of sidewalks being uneven due to heaving,” Doerzaph said. “A sidewalk that is not a problem one year could be a problem the next.”
Due to limited funds and planning, there are very few water drainage inlets on the quad. Because of this, water becomes trapped at certain areas on the quad, and the crew relies on absorption in order to get rid of the water.
Safety, however, tends to beat out renovation based on water-related problems.
“With limited funds, we first try to correct those sidewalk conditions that present safety concerns,” Doerzaph said.
Sidewalk heaving is one of the main safety problems that is dealt with on a yearly basis.
“We try to replace any damaged sidewalks,” he said. “Sometimes we can grind raised walks if they present a tripping hazard [because of heaving].”
More from NewsMore posts in News »