Springboard winner announced: Toldmi will use contest to get off the ground 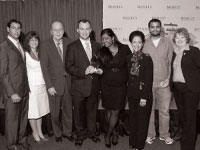 Amidst fierce talent at the fourth annual Project Springboard competition, Toldmi emerged as the first place victor.
Toldmi, a free media company focused on providing users with a personalized community events calendar, received a $10,000 cash prize, consulting services from Junction Ventures, office space at the Bradley Technology Commercialization Center and more to help stabilize their company for the first year of operating.
Toldmi team members include senior finance majors Mike Luchies and Suswara Gayam and graduate computer science major Ravinder Punia.
“This project targets our demographic exactly,” Gayam said. “Students have had a hard time finding things to do, and they just didn’t have the right avenue to find it. This online application will filter, share and cumulate events in a single location.”
Gayam said Toldmi will be free for the students, and the only payments made will be from the businesses that use it for their events.
Business management and administration professor and Springboard judge Eden Blair said all of the businesses involved in the competition had really viable business plans.
“Entrepreneurs often treat their ideas as their children,” she said. “The students here today took their babies and presented them to a panel of discerning judges. You can imagine how difficult that is. Toldmi seemed to have the greatest growth potential, and they really understood their business well.”
The six contesting teams, B Charged, Inc., Evening’s Empire Recording Company, Beatnex Media, Paw Spa, TAPS Bar, Co. and Toldmi, presented their plans to a panel of judges throughout the day Monday.
The competition came to a close with a dinner where the winners were announced. Peoria Mayor Jim Ardis, University President Joanne Glasser and Springboard creator Alexis Khazzam were some of the speakers for the evening.
“The reality is that small business has been and will be the driving force for our economy,” Ardis said. “And it’s that entrepreneurial spirit that’ll continue to drive it.”
Second-place winner Evening’s Empire Recording Company received $7,500, third-place winner Paw Spa received $5,000 and TAPS Bar, Co. won recognition for best presentation and best financial plan.
A common thread among the competitors was that they all planned to move forward with their business whether or not they won.
“If we win, we will set up our bars first in Peoria,” graduate business administration and TAPS Bar, Co. member Svatava Kubankova said before the winners were announced. “And if we don’t win, then we can set it up anywhere.”
Project Springboard, started in 2006 by Alexis Khazzam of Junction Ventures LLC, has provided more than 150 jobs to the Peoria community, Khazzam said.
“When a winning team comes out, they get full support,” he said. “This program is a best-case scenario right now. Every one of these past winners is living off of their ideas.”
Glasser said in the last four years, Project Springboard has become a “jewel” at Bradley, and was represented this year by students in majors such as business, psychology, engineering, communications, legal studies and computer science.
“Bradley and Project Springboard are an entrepreneurial match made in heaven,” she said.
More from NewsMore posts in News »