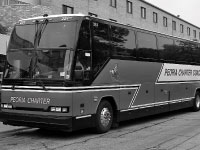 The Fall Break bus ride to St. Louis had a decent turnout, with 25 riders taking the bus down to St. Louis and back.
The university was hoping for at least 20 riders, so the first bus was a good start, Vice President for Student Affairs Alan Galsky said.
“We were pleased with the turnout,” he said.
There was also very encouraging feedback from the parents and students. Parents were sent a letter earlier this semester about the possibility of bus transportation to St. Louis during the university-sanctioned breaks, and the responses were very optimistic, Galsky said.
A few more zip codes were added in the next round of letters to include students who live closer to the Kansas City area.
The St. Louis bus left campus Oct. 9 and stopped at Collinsville, St. Louis Mills Mall and the West County Mall. It then repeated those three stops in reverse when it left for Peoria on Oct. 13.
These will also be the stops for Thanksgiving Break.
Unlike the Chicago bus rides that leave daily from the student center, the St. Louis bus is chartered by Bradley, not the Peoria Charter Company. The bus rides to Chicago are organized by the PCC, because there is more demand for Chicago-bound buses than St. Louis ones.
“We are in charge of administration and have fiscal responsibility,” Galsky said.
However, he said the university hopes to acquire enough passengers to interest the charter company in including a St. Louis bus in its schedule.
The university hopes to expand this service to other major cities, such as Indianapolis, but there are no immediate plans, and no concerns for such a bus have been expressed, Galsky said.
“My hope would be that the student population would be significant enough in three or four years for consideration, there are not enough people now, but it certainly is a goal,” he said.
Over the last two to three years, there have been student and parent requests about transportation to St. Louis. Prospective students also wonder what transportation is available to and from Peoria.
The Peoria International Airport used to offer a flight from Peoria to St. Louis, but due to cutbacks, this option is no longer available.
Those students wishing to fly further south would be forced to backtrack to Chicago before flying to their destination. As there are no trains from Peoria to St. Louis, buses would be the only option for public transportation left to students.
Junior psychology major Michelle Hartman said she would be interested in using the bus system to visit some members of her family who live in St. Louis.
“I think the bus system would be great,” she said. “I’m not familiar with the St. Louis area, and this way I wouldn’t have to worry about getting directions or getting lost.”
The Thanksgiving Break buses will leave at 4 p.m. Nov. 24 from the student center and return at 4 p.m. Nov. 29.
The university hopes to fill  more seats at Thanksgiving by informing parents of cities west of St. Louis, such as Kansas City, Mo., of the bus option.
More from NewsMore posts in News »