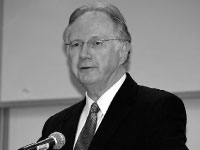 When Illinois Supreme Court Justice Thomas Kilbride began to teach his 9-year-old daughter about the Civil War, her first response was, “Why would we want to fight Disney World?”
“It’s understandable that a 9-year-old wouldn’t understand the Civil War, but when educated students and adults don’t, that’s not good,” Kilbride said on campus this week. “It’s not in our genes to know about the founding of our country or its issues, but we’re lacking in civil knowledge and we need to do everything we can to learn more about it.”
Very few people can even remember basic facts about the government that are taught in middle school, University President Joanne Glasser said.
“Not many students can recall the most basic of facts in regards to our judicial system and country’s history,” she said. “A lot of the basics are taught in middle school and high school, and students have already forgotten it.”
Only one in five people in America know the quote “government of the people, by the people, for the people…” is from Lincoln’s famous Gettysburg Address, Kilbride said.
“I had to memorize the Gettysburg Address in school,” he said. “It’s a very important part of this country, and it’s being lost in today’s society.”
Children and adults in this day and age really suffer from not having enough education about government, Kilbride said.
“In the 1960s, students received three semesters of civics,” he said. “Today they might receive one semester, if that. Government classes are usually elective classes now, not part of the required curriculum. This shouldn’t be the case.”
Schools’ priorities need to be reevaluated to fix this problem and add more civics to the school system, Kilbride said.
“Children with civics education will be more tolerant of views other than their own, they will be more cooperative and will also be a lot more involved with the community,” he said. “People who are educated in civics will be a lot more likely to participate in elections and vote.”
The No Child Left Behind Act may be partially to blame for the lack of civics teaching, Kilbride said.
“In the seven years since the act was passed, $6.2 billion has been spent on it and yet none of that money has been spent on the teaching of civics,” he said. “To comply with the act, teachers have to stay on course completely. This might mean cutting out topics like art, music and civics.”
In order to get civics back in the classroom, everyone needs to help, Kilbride said.
“Talk to a local legislator,” he said. “Ask them if they know if civics is one of the topics covered on the PSAE and ISAT tests. Ask local teachers and civics groups to help endorse teaching civics in schools. Talk to schools and clubs to see if they’d be willing to participate in civics debates once in a while. Mock court cases are a great way to learn more about civics.”
More from NewsMore posts in News »