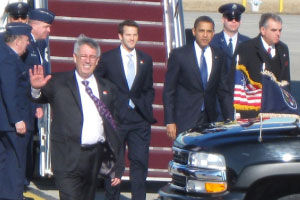 Aspects of package may affect Bradley students
The $787 billion economic stimulus bill, which President Barack Obama signed into law on Tuesday, includes a higher education tax credit aimed at helping families with children in college.
Financial Assistance Director Dave Pardieck said the increased tax credits are one aspect of the stimulus package that will affect Bradley students the most. However, it’s difficult to say if families will benefit from the tax credits, which will add about $13 to workers’ paychecks, according to the Associated Press.
“They’ve allocated $13 billion for a tax credit of up to $2,500,” Pardieck said. “There are currently two tax credits, the Hope Tax Credit and Lifetime Learning Tax Credit. [The stimulus package] will probably expand those two tax credits.”
The Hope Tax Credit only allows for $1,800, and students can only receive it during their first two years of college. As part of the stimulus package, college students will be able to claim tax credits of up to $2,500, according to USA TODAY.
However, political science professor Craig Curtis said he doesn’t think the tax cuts will have much influence on families’ budgets.
“That’s too little money to have any real effect on the middle classes,” he said. “They’re not going to realize the effect of that little money.”
Curtis also said he has reservations about the cost of the stimulus package, however he said it is “a political necessity.”
“[President Barack Obama’s] administration promised it and all the folks that were elected to Congress promised it, and they have to,” he said. “And it’s pretty much conventional wisdom … that you spend money in times of recession as a way of jumpstarting the economy. We pretty much have to respect that it’s worked in the past.”
But there may be a side effect of the stimulus package that will affect Bradley students in the future.
“It’s all borrowed money,” Curtis said. “It’s money that you’re going to have to pay off with your money that you’re going to make when you graduate from Bradley.”
The stimulus package will also increase the maximum Pell Grant fund a student can receive by a little more than $600.
Pardieck said the increase in the funding for Pell Grants, which provides money based on need to undergraduate students, will affect the 20 percent of students receiving Pell Grants.
Pardieck said the Federal Pell Grant Program is “the centerpiece of the federal financial aid system. It awards anywhere from $200 or $300 a year … based on a formula the federal government provides.”
However, Curtis said there are larger factors families consider when sending their children to college.
“These kinds of decisions are not necessarily driven by Pell Grant increase or tax cuts, but by the overall economic health of the family,” he said.
Another aspect of the stimulus package that Pardieck said will have a slight impact on Bradley students is the increase in government funding for work study programs.
The Federal Work Study Program provides funds that students earn through part-time jobs. There is a limit to the amount of money a student can earn through the work study program, and the stimulus package will slightly expand that limit.
Out of the $787 billion stimulus package, $32 billion is allocated for higher education. The stimulus package also allows for $15 billion for scientific research, most of which will go to universities.
Despite increasing funding for higher education, Curtis said the stimulus plan will not have many short-term effects.
“The stock market exists on confidence,” he said. “People are willing to invest money and equities if they believe the economy is strong … if you can inspire some confidence with a stimulus package, then people are more willing to invest.”
More from NewsMore posts in News »