Student center’s Blimpie will not return next semester 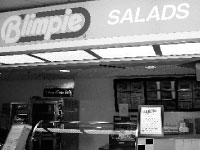 When students return from Winter Break for the spring semester, they can expect to see the trademark green and white Blimpie signs gone forever.
The university has decided to stop paying the Blimpie commission fee and instead bring in a Food Service-run sandwich counter very similar to the one in Center Court. The new sandwich shop will offer many of the same sandwiches as Center Court, as well as soups and salads.
This change is in response to the Food Service survey done last year, in which Blimpie rated very low in student opinion. It is also based on student requests for a change received through Student Senate and the Association of Residence Halls.
Campus Affairs Chairperson Maggie Hammar said students wanted fresher options and something they couldn’t get every day.
The sandwich counter will provide less processed meats and a wider variety of fresher options for the time being, she said.
Some students said they think this is a welcome change.
“I do not like Blimpie. They run out of food and it is usually cold,” junior finance major Nick Rizzo said. “The people who work there are very nice but the food could be better.”
Other students said they agree.
“I had one bad experience at Blimpie when I got a chicken sandwich and the meat was very fatty,” senior elementary education major Erin Brennan said.
Food Service Director Ron Gibson said he saw this tendency in the Food Service survey.
“The satisfaction with Center Court over Blimpie was overwhelming,” he said.
The quality of the meats provided seems to matter to students, and the meat quality should improve with the switch, he said.
Gibson also said the university will now be able to offer a wider variety of breads, meats and cheeses, than those which were provided by Blimpie, since paying for the Blimpie name means using whatever foods they send out.
As of right now, the change is a temporary one. There is consideration for a commercial restaurant eventually taking the place of Blimpie and a Center Court-like sandwich service.
Gibson said the ultimate plan for the Student Center is to form a committee of students who will assist in the decision.
“We want the committee to be a mix of all students – on campus, off campus, Greeks, non-Greeks, dorm students, etc. It will probably consist of 15 students … we’ll look at options for restaurants which will possibly move into the student center over the summer,” he said.
Unfortunately there are many limitations as to what commercial restaurants can go into the space left by Blimpie.
Gibson said a much favored replacement by many students is Taco Bell, but due to franchising laws this is not a possibility.
“The person in Peoria who owns the franchising rights to Taco Bell only wants them free standing and not in universities,” he said.
But, if students would like to have a say in the restaurant that may end up in the Student Center, Gibson said he will try to involve as many students as possible.
“One of the things I’ll suggest [to the committee] is to put out a survey once it is narrowed down to get a wider range of student opinion … the committee will be all students and I will sit on it as the chair, but the decision is up to the students,” he said.
Another more oft requested food chain by students is Panera Bread, but, there is not enough room in the floor plan for one in place of the Blimpie, Gibson said.
Other options suggested by students include Panda Express, Chicago Style Pizza, Pot Belly’s or Qdoba.
Students offered up other options they would appreciate seeing in the Student Center.
“I think Chipotle would be a good addition because it is fast and fresher,” senior chemistry major Kylee Korte said. “The only problem would be that it is more expensive than Blimpie.”
More from NewsMore posts in News »