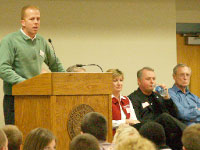 Issues ranging from as light-hearted as Bradley not having a mascot to those as serious as the Comprehensive Alcohol Action Plan’s effectiveness were brought up at an event on Tuesday night.
“I don’t think this will make a difference right away, but it will bring issues to administrator’s attention that they might not have known about before,” Junior French major Michelle Dukes said before the event, “Speak Up!,” began.
One issue brought up was why professors are not required to post midterm grades on Blackboard.
“The Student Senate voted to not require professors to do that about ten years ago,” Associate Registrar Andy Kindler said. “Student Senate can vote to require it now if they like.”
Students also asked administrators if anything was being done to raise the library’s low national ranking.
“A student advisory committee has been set up to look at the library and give recommendations on what should be done,” Interim Provost Robert Bolla said. “The report should be done around Thanksgiving and we will look at these suggestions.”
University President Joanne Glasser also attended the event. Although other administrators answered most questions, she addressed a question about this year’s lower enrollment.
“We dropped the ball on enrollment because we did not do a good job following up with students,” she said. “I take the Bradley experience very seriously and I want to give students the quality education they had hoped for.”
Associate Provost for Information Resources and Technology Chuck Ruch cleared up the speculation of AT&T building a tower on campus.
“A tower will not be put in,” he said. “AT&T told us that it does not fit their business plan to do that.”
Another student asked about wait lists and why there are not more seats available for classes.
“It’s a great advantage to have wait lists,” Kindler said. “It takes time to determine if resources are available for another class.”
Some students expressed frustration at the administrators’ answers.
After an exchange between a senior speech team member and the Dean of the Slane College of Communication and Fine Arts Jefferey Huberman, Student Body President Jordan Ticaric admitted she “had her blood pressure raised on that one.”
At one point, the Bradley Ensemble Group filed into the back of the ballroom and participated by asking a question important to them.
“Why don’t we have a place on campus to practice?” one member asked.
The answer given was, “Sometimes we allow groups to expand without accommodating their expansion. Space is expensive.”
The controversial issue of the university handing out free condoms was also discussed.
“Emotions run high on both sides of this issue,” Bolla said. “It’s something we have been considering for a long time but are not doing right now.”
At multiple points, administrators answered students by telling them to see them afterwards or to contact the chair of their department.
“I think maybe they were avoiding questions by responding like that,” freshman engineering major Kyle Brashler said.
More from NewsMore posts in News »