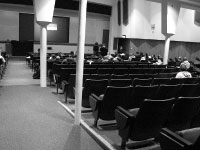 One of the most used-lecture halls on campus may see a face lift.
Student Senate unanimously passed two resolutions, both calling for renovations to be made to Neumiller Lecture Hall.
“There are definitely some things within Neumiller Hall that need to be updated,” said Student Body President Kyle Malinowski.
Senate’s Academic Affairs Chairwoman Amanda Wenger said she has taken notice of the condition of Neumiller Hall and said she believes it needs to be on its way to renovation.
Wenger composed two resolutions, one concerning handicap accessibility and the other addressing the aesthetics of the hall.
According to the first Neumiller Renovation Resolution, Neumiller Hall is currently not handicap accessible. The resolution says the aisles are not wide enough for a person in a wheelchair to comfortably complete a 360-degree turn and the stage is not accessible for those who cannot use stairs.
The resolution calls for Bradley to redesign the Neumiller stage to include a ramp as well as to pay greater attention to handicap accessibility in future lecture hall design and construction plans.
“It just makes a lot of sense,” said Student Body Secretary Candace Esken. “Neumiller Hall needs to be accessible to all students at all times.”
Malinowski said he is ashamed by the hall because it is not handicap-accessible.
“This university has recently hosted very important debates as well as speakers in that lecture hall,” he said. “It is embarrassing that it wasn’t handicap accessible in the first place and it should be fixed.”
The second resolution focuses on the learning environment of the lecture hall.
The Neumiller Aesthetic Renovation Resolution reads “Neumiller Lecture Hall has played host to orientation sessions, nationally renowned speakers and many other distinguished guests of the university and in its current state is extremely aesthetically outdated and does not provide a comfortable learning and hosting environment.”
The resolution calls for chairs, desks, carpet and wood paneling to be replaced or modernized as well as to improve the quality of lighting for academic use.
“There are so many people who use Neumiller Hall and many people who visit the campus and are brought to the hall.” Wenger said. “Neumiller Hall isn’t an accurate representation of what Bradley has to offer.”
The second resolution also calls for the addition of Bradley symbols and colors and the installation of a properly working clock.
Heitz Senator Wade Hatler said a working clock is something he would love to see in the hall.
“A working clock would be great,” Hatler said.
More from NewsMore posts in News »