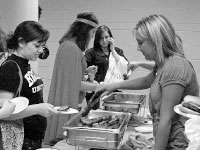 Students can travel around the world while staying in the Markin Family Student Recreation Center at the second Late Night BU of the year.
The event, which will take place from 10 p.m. to 2 a.m. Saturday, will highlight different destinations.
Each will have interactive stations, such as Las Vegas with a blackjack and roulette table, and China with sumo wrestling and origami. The swimming pool area will transform into Tahiti with limbo dancing and hemp bracelets. The main gym will represent the Southwest, complete with a mechanical bull.
Director of Student Activities Michelle Whited said last month’s event was a success.
“It was a lot of fun, and we are hoping to have a similar turnout this month,” she said.
November’s Late Night is in conjunction with the Suitcase Social, an annual event sponsored by the Association of Residence Halls.
Students come with their suitcases packed and ready to depart for an unknown destination, and several trips are given away.
Regent Broadcasting will provide the musical entertainment at the event. Blue Print, a local hip-hop band, will play in the main gym.
Free food will also be available.
“This evening is part of the Alcohol Action Plan, that came out last spring, to provide late night programming on campus,” Whited said. “ It is an alternative to partying, if the students want to do something else.”
Late Night BU is planned by the Student Planning Committee that represents several different student organizations, with the help of Campus Recreation, the Wellness Center and Student Activities.
“We are planning on having four Late Night BUs a semester,” Whited said. “And every one will have a different theme.”
December’s event will have a stress release theme and will feature, among other things, pedicures, manicures and massages.
Some students who attended October’s event said they are looking forward to Saturday’s Late Night BU.
“Last month’s event was a lot of fun,” said Kathleen McGing, who also is on the planning committee. “There were a ton of people there. People were dressed up and they participated in a lot of the activities. I am going to go this Saturday. Hopefully it will be as good, or even better.”
Sophomore public relations major Alyssa Shyken said she is looking forward to the food.
“Last month, Alexander’s Steakhouse cooked some food, and that was really good. I hear there is going to be food there from around the world,” she said.
Whited said the goal for Late Night BU is to provide a fun and safe environment for the students.
“We are pretty excited about it,” she said. “ We want the students to have fun and hang out with their friends.”
More from NewsMore posts in News »