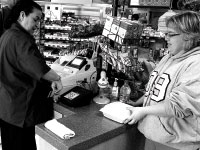 Center Court extended its hours to midnight last week and the change has already received positive responses.
Director of Food Services Ron Gibson said there’s been a good student reaction from the increase of hours.
“We have been averaging about 330 students from 8 p.m. to midnight,” he said. “We are hoping as the weather gets nicer more students will take advantage of the patio.”
Gibson said the extension is a service to the response to the needs of the student body. The change was formed after a request from Student Senate and the Association of Residence Halls.
Jimmy Lombard, campus affairs chairperson of senate, said students have been taking advantage of the late hours.
“Last Thursday, Student Senate worked with the Williams Hall’s management team and we put together a kick-off party for the new hours,” Lombard said. “The event went better than I expected and a lot of people showed up throughout the night, even until midnight. At this event and through the week, I talked with students and have found that they are in favor of the new extended Center Court hours.”
Freshman biology major Erin Brown said she is happy about the hour extension.
“The food in the cafeteria makes me sick and there’s no place around here to get healthy food,” she said. “Center Court isn’t too expensive and now it’s open when I’m studying late so I can get food. There’s no place besides Bacci’s [and Center Court] that has a wide variety.”
Brown said before the hour extension she and her friends were limited in their food options.
“I know a lot of my friends like to go [to Center Court] late at night,” she said. “Before they changed the hours I just didn’t eat past 8 p.m. really, or I just ate little things in my room.”
Gibson said hour extensions have been conducted in the past but weren’t successful.
“We did have extended hours several years ago, but there was no participation to support the service,” he said. “That is the great thing about working in a university environment – it is always changing and part of our job is to be able to accept and make changes as needed. Things do not always work out but we will accept the challenge, try it and move forward from there.”
He said the extension could be kept after this semester if things continue to go well.
“It looks to be a good move but we will need to re-evaluate the numbers after this school year,” Gibson said.
Lombard said students will be receiving surveys soon regarding their feelings about the hour extension.
“If the results come back and the students are in favor of the new hours and would like to see them extended even later, Student Senate will talk with the administration,” he said. “Even if the students are not in favor of extending the hours even later, I hope that we can keep Center Court open until midnight Monday through Thursday and on Fridays until 8 p.m.”
Center Court is open Monday through Thursday from 11 a.m. to midnight and Friday from 11 a.m. to 8 p.m.
Students can find late night food options at Lydia’s Lounge on weekends, which is open from 8 p.m. to midnight Fridays and Saturdays.
Gibson said Center Court is not open on weekends because “we did not want to overlap with the great momentum of what is going on at Lydia’s.”
Brown said she hopes the university continues to provide late night food options for students.
“[Extended hours] are very important,” she said. “Many students are up past 8 p.m. studying. It’s important for them to have healthy choices. They need food to stimulate the brain and help studying.”
Lombard said he agrees with Brown.
“These new hours give students the ability to eat somewhere on campus late at night,” he said. “Especially if a student does not have a car, the hours create a safer atmosphere for students so that they are not walking off campus late at night.”Studfafdafd
More from NewsMore posts in News »