Students fiesta until they siesta at LNBU 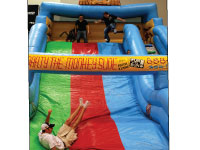 Last week’s fiesta-themed Late Night BU, the second of many scheduled for this year, marked almost a year since the program began with food and fun activities for Bradley students.
As usual, Late Night BU provided students with games, food and activities as a free and fun alternative to drinking.
Students said they especially enjoyed some of the newer activities, such as the large inflatable monkey slide, airbrush tattoos, custom airbrush trucker hats, obstacle course and mechanical bull.
Sophomore AEP major Symone Buckner said she most enjoyed the inflatable monkey slide.
“I raced my friends down the bouncy, inflatable slide,” she said. “It was fun and I won.”
Sophomore mechanical engineering major Ethan Blank said he liked some of the new activities.
“They had a lot of new things going on at this Late Night BU,” he said. “I liked the mechanical bull and the obstacle course the most.”
Other activities at Late Night included free salsa lessons, fiesta-themed photos, pinatas, laser tag, video game tournaments, maraca decorating, performances by comedian Adam Grabowski and chess and checkers games.
Sophomore psychology major Brittany Copeland said she thought the activities were all good ideas, but some could have been improved.
“I waited in line for an hour to make a trucker hat with my friends, but by the time we got to the front they ran out of hats,” she said. “The fact that we waited for that long and weren’t told there wasn’t going to be enough hats was a bummer.”
Any hungry students were able to make and eat walking tacos, as well as eat nachos, brownies, snow cones and popcorn. The food was free, as it always is.
“The first thing I did was eat – the food was good,” Copeland said.
Buckner agreed the food was good and said she remembers the walking tacos being the best part of Late Night BU.
One of Late Night BU’s main goals has always been to provide students with the opportunity to have fun in ways that don’t involve alcohol. The event this month seems to have successfully reached that goal.
“I appreciate the school’s dedication to providing students with an alternative to drinking for those who choose not to drink,” said sophomore finance major Ben Sellnow. “A lot of my friends at other schools complain that there’s nothing for them to do but drink, so I appreciate that we have Late Night BU and other events and activities that give me a chance to do things that don’t involve alcohol.”
More from NewsMore posts in News »