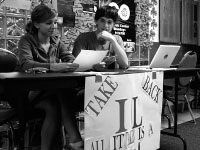 Students who think Illinois government is corrupt can help make a step toward changing that in the next few weeks.
The Illinois Fair Map Amendment seeks to change the way state legislative districts are drawn. On average, 98 percent of incumbents are reelected because as the map stands now everything is a “safe zone” said Brad McMillan, director of the institute for principled leadership in public service.
“This is really an antiquated system that doesn’t serve the interest of the people,” he said. “If we don’t do anything to change it, the politicians behind closed doors will choose their own voters.”
As the system is now, if the parties don’t agree on the maps the secretary of state draws a party out of a hat and that party gets to control the map for the next 10 years. The parties haven’t agreed in more than 30 years, McMillan said.
Under the amendment the map would be drawn transparently by an independent bi-partisan.
McMillan, an Illinois Reform Commission member, said the group based the amendment on the successes and failures of more than 10 states that recently redrew their maps.
The group needs to collect 288,000 signatures by April 16 to put the amendment on the ballot in November. However, because many petitions are often declared invalid, the aim is to collect 500,000.
President of Students Promoting Political Involvement Mike Kittleson is one of many students circulating petitions on campus. He said he encourages state residents to sign the petition, because they can always choose to not vote for it in November anyway.
“The idea is the districts they draw will be more fair because they won’t be so cushy in their reelections,” he said. “The key is that they won’t be able to look at how people have voted in the past.
Kittleson said although some students may not be interested in politics, he thinks they should be interested in this, if for no other reason than student loans.
“We saw how the MAP grant was affected in the fall,” he said. “It’s critical for students go out there and demand their [representatives] represent them, too.”
Students have been collecting petition signatures in the Michel Student Center and the residence halls. Both McMillan and Kittleson said they’ve gotten positive responses.
“Most students don’t know about it, but once I explain it, it’s rare someone turns me down for adding their signature to it,” Kittleson said.
McMillan said he’s only had one rejection, because the person wanted to read more about it.
Those interested in reading more about the amendment can visit www.ilfairmap.com. Students seeking to fill out a petition can e-mail Kittleson at mkittleson@bradley.edu or President of College Republicans Justin Green at jmgreen@bradley.edu. Petitions are also available online or in McMillan’s office, 408 Jobst Hall.
More from NewsMore posts in News »