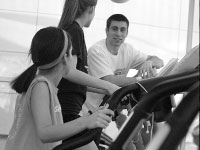 The Markin Family Student Recreation Center has experienced a large rise in participation this semester.

The Executive Director of Campus Recreation and Athletic Facilities said there have been at least 300 more card swipes this spring than the last.

Keup said he thinks participation has risen because of the group fitness classes the Markin Center offers.

“There has been an unbelievable participation in group fitness,” he said. “There are people who come [to the Markin Center] 30 minutes before their spin class just to claim a bike.”

Keup said because of the graduation of students who led the classes, there are fewer classes being offered, but the class sizes are getting larger.

“Some classes have more than 40 people in them,” he said.

He also said new classes are being added.

“We’ve had a large interest in Turbo Kick, which is a new class,” Keup said. “Also Aqua Zumba, which is Zumba in the pool, has drawn a lot of attention.”

Junior management and administration major Garrett Gawne said he has participated in both Aqua Zumba and spin class.

“It was quite fun and a great way to start my day,” he said.

Gawne said he has seen a lot more people in the Markin Center.

“I think more people are participating [in classes,]” he said. “I also think there are a few more then usual. Probably due to New Year’s resolutions.”

Keup said every year there is a lot of usage at the beginning of the spring semester until Spring Break, but records show this year there has been more activity.

“We have sold close to 200 group fitness passes since the beginning of the spring semester,” he said. “This number is tracking a little ahead of what we experienced for the spring of 2009 semester.”

Keup said another factor that contributes to high participation is the Get Fit Stay Fit program that recently started. The program gives participants points each time they enter the Markin Center and the points can be used to win prizes.

“I think it’s drawn attention because if is a free program,” Keup said. “There’s no reason for people not to sign up. It challenges people to get activity in life by setting goals, being nutritional and making it a habit.”

Gawne said he is a participant of Get Fit Stay Fit and thinks the program is a good idea.

“I am proud to spread the word about it,” he said. “I am glad the program exists and I think it is helping people go to Markin more.”

Gawne also said he has many friends who are in the program as well.

“I told my many of my friends about it, and judging by the size of the check in binder at Markin, the program has a pretty large number of participants,” he said. “To many of us it is a competition.”

“There will be a closing ceremony at the end with a raffle,” he said. “We’re working on giving away prizes like a locker, group fitness passes and a Wii Fit.”