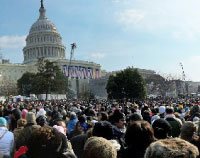 Ben Koch stood among more than a million people to witness history in the making as President Barack Obama took the oath of office.
But if you were to ask Koch in November if he thought he would be witnessing a democrat take the White House, he probably would have told you no.
“I voted for John McCain,” the junior English major said.
But in his inaugural speech, Obama called for a united America, Koch said.
“No one there was a democrat or a republican,” he said. “If you were there, it was because you believed in your country.”
Koch spent 10 days in Washington, D.C., to attend a seminar, and he was lucky enough to experience what he called “the excitement being generated in the city.”
“I was not there because of Barack Obama,” Koch said. “I was there for the inspiration that so many people have right now to do great things, to put into practice great government.”
Koch waited in a car tunnel for about six hours before finding a spot at the event.
“It was 5:30 [a.m.], and the line was already thousands and thousands and thousands of people,” he said. “I walked about a quarter of a mile and I thought, ‘I must be the last person here.’”
He said people were getting tense in the tunnel after waiting for so long.
“Everyone started yelling, ‘let us in let us in,’” he said. “Finally at 11:15 they started letting people in, and 11:30 I got in and missed the first part of it.”
When Koch finally made it to his section, he realized he couldn’t see the stage and a tree blocked his view of the jumbotron.
“Well, if I couldn’t see history … at least I could hear it!” Koch wrote in a blog posted on the Bradley Web site.
He said his favorite parts were the people he encountered at the inauguration and the comments they made.
“It would be that older woman who was in a wheel chair who was so determined to be there,” he said. “To see the parent who has a child on his back … wanting to say, ‘your child was a part of it.’”
Although Koch didn’t initially support Obama, he said he thinks he is on a good track.
“[The inauguration] was one of the most patriotic experiences,” he said. “It was cool to think that there were people here that, yeah, they’re excited about our president, but they’re excited about our country.”
Senior management and administration major Lauren Porto and senior economics and German major Owen Irwin also attended the seminar in D.C. and they were present at the inauguration.
Beth Hoover, a senior accounting and entrepreneurship major, was also in D.C. for the historic event.
Hoover, who is a member of the colorguard in The Colts Drum and Bugle Corps, said she was floored when she found out “just a little corps from Iowa” was chosen to perform in the inauguration parade.
She said the group woke up at 4:30 a.m. for the 2 p.m. parade.
“While we were in the tent waiting, we were watching it and we could actually hear [Obama] speak. It was very cool,” she said.
The group was told they would be outside for 90 minutes, but the parade was delayed.
“Obama finally got to the parade and no one thought about the cold,” Hoover said. “It was very surreal. There were so many people and everyone was going nuts. It was cold, but it was worth it.”
Senior public relations major Alex Navrotski is also a member of the corps, and he played  the trumpet at the parade.
More from NewsMore posts in News »